The Museum is open Thursday - Sunday from 10:00 a.m. - 4:00 p.m. Starting June 21, the Research Room is open Tuesday - Thursday by appointment only. View our Visiting Safely FAQ.

After World War II, many Americans worried that US citizens, especially the young, were growing overweight and out of shape. The nation's economy had changed dramatically, and with it the nature of work and recreation changed. Mechanization had taken many farmers out of the fields and much of the physical labor out of farm work. Fewer factory jobs demanded heavy labor. Television required watching rather than doing. Americans were beginning to confront a new image of themselves and their country, and they did not always like what they saw.

A New Federal Agency Shapes Up 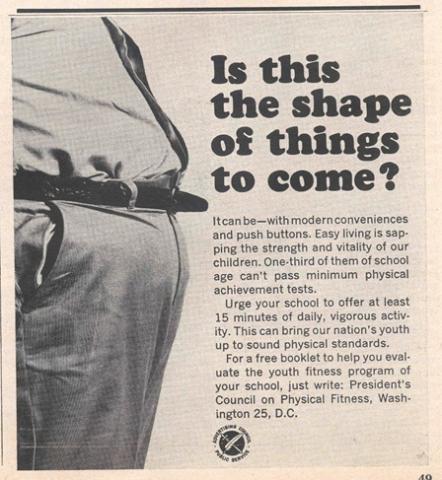 As a military man, President Dwight D. Eisenhower was probably already sensitive to the issue of physical fitness. Military officers grumbled about the condition of draftees during World War II and the Korean War. But concern about fitness peaked in the mid-1950s with publication of an international study that found American children far less fit than children in other countries. In response, President Eisenhower established the President's Council on Youth Fitness with Executive Order 10673, issued on July 16, 1956.

Despite widespread support inside and outside the government, the council never quite found its way during the Eisenhower years. Personality conflicts and organizational difficulties often bogged down the council, but the real problem was that no one was clear about its purpose. Did fitness include intellectual, emotional, spiritual, and social fitness as well as physical fitness? Uncertainty about the meaning of fitness went hand in hand with uncertainty about actions to be taken. And for many connected with the council's work, the idea of the nation's youth constrained by a state-ordered fitness program seemed a little "red," even fascist. The goal and ideal of the council during this Republican administration was to make fitness a nationally recognized local problem.

In the end, another crucial factor that prevented the council from reaching its full potential was the inattention of the president. Having established this council, Eisenhower rarely spoke on the subject of fitness and did not appear at any of its annual conferences. John F. Kennedy's approach to the problem of fitness would be very different.

John F. Kennedy showed his commitment to improving the nation's fitness even before he took the oath of office. After the election, he published "The Soft American" in Sports Illustrated. The article established four points as the basis of his proposed program, including a White House Committee on Health and Fitness; direct oversight by the Department of Health, Education, and Welfare; an annual Youth Fitness Congress to be attended by state governors; and the assertion that physical fitness was very much the business of the federal government. 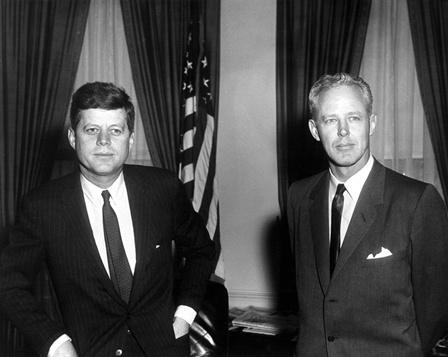 Only a month after the inauguration, the new administration convened a conference on physical fitness, reorganized the President's Council on Youth Fitness, and chose a new director, Charles "Bud" Wilkinson, a highly successful University of Oklahoma football coach. True to Kennedy's style, the new executive for the council was named a special consultant to the president. The president's council unquestionably became President Kennedy's council.

Kennedy's success was not just a matter of bureaucratic changes. Unlike his predecessor, Kennedy addressed the issue of physical fitness frequently in his public pronouncements and assigned new projects to the council. Perhaps his most famous intervention in the area of fitness was the fifty-mile hike. In late 1962, President Kennedy discovered an executive order from Theodore Roosevelt challenging US Marine officers to finish fifty miles in twenty hours. Kennedy passed the document to Marine General David M. Shoup. The president suggested that Shoup bring it up as his own discovery and challenge modern day Marines to duplicate this feat. Kennedy went on to say that:

Should your report to me indicate that the strength and stamina of the modern Marine is at least equivalent to that of his antecedents, I will then ask Mr. Salinger to look into the matter personally and give me a report on the fitness of the White House Staff.

In conversations with his press secretary, Pierre Salinger, Kennedy left no doubt that "look[ing] into the matter personally" would involve Salinger walking fifty miles himself. A well-padded individual with a sense of humor, Salinger turned his efforts to avoid the hike into an open joke. He finally released a statement on February 12, 1963, in which he publicly declined the honor. Attorney General Robert Kennedy undertook the hike, clad in leather oxford shoes, and completed the full distance through snow and slush. Salinger pointed to him as proof of the administration's fitness.

But the real impact of the fifty-mile hike was with the public at large. Many Americans took the hike as a challenge from their president. The Kennedy council capitalized on this enthusiasm with a national publicity campaign on physical fitness. The campaign was organized, extensive, media-savvy, and above all, countrywide. Material was produced for print, radio, television, and display advertising. For broadcast alone, 650 television kits and 3,500 radio kits were sent out. All of this was in addition to the continued encouragement through public relations outlets. The physical fitness theme even appeared in the comics page, as seventeen major syndicated cartoonists took up the subject, including Charles Schulz of "Peanuts" fame.

The oddest contribution to the effort may have been the "Chicken Fat" song. Meredith Willson, creator of The Music Man, wrote the song. It was sung by Robert Preston, the star of the musical. "Chicken Fat" was produced in a three-minute, radio-friendly version and a six-minute version to accompany schoolchildren during workout routines. The song didn't get much airplay, but the chorus of "go, you chicken fat, go!" was ingrained in the memories of tens of thousands of children doing sit-ups in school gyms around the country.

Although the council did not have the authority to impose a national program, it developed and promoted a curriculum to improve fitness. The council's fitness curriculum was devised with the cooperation of nineteen major US educational and medical organizations. Two hundred thousand copies were distributed at no cost and another 40,000 were sold. The council engaged in a sweeping drive to achieve widespread participation in the program for the 1961–1962 school year. A core group of almost a quarter of a million schoolchildren took part in pilot projects in six states. At the end of the year, half again as many students passed a physical fitness test as had a year earlier. Furthermore, there was a general improvement of physical education programs around the country.

With success came expansion. Renamed the Council on Physical Fitness, and later the President's Council on Physical Fitness and Sports, it added new programs and awards and enlarged existing programs in later administrations. But the achievement of the Council on Youth Fitness was as much political as educational. In a general sense, the actions of the Kennedy council were a minor triumph of liberal Democratic thinking. A nationwide problem was identified and a national response was developed through the resources of the federal government. The program produced a measurable improvement in fitness nationwide as well as a shift in public attitudes and wider participation. The work of the council also helped identify President Kennedy with fitness, vigor, and preparedness. Energetically promoting the fitness message brought both message and messenger to the public. It is not too much to say that the council's fitness programs were a way of encouraging the nation's youth to participate in the "New Frontier." 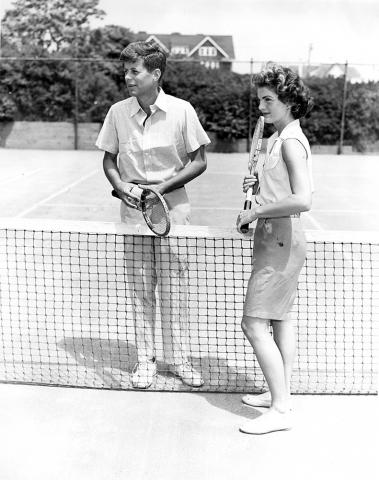