Deputy Director, The March on Washington 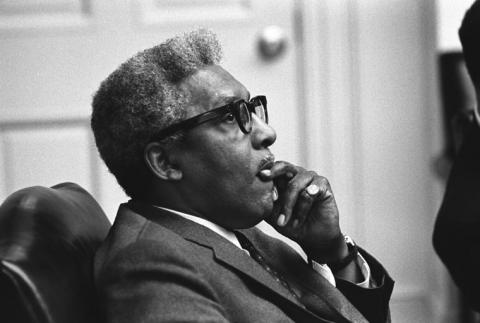 Once called "the Socrates of the civil rights movement," Bayard Rustin did not head an organization. He was known as "an intellectual engineer behind the scenes," and the success of the March on Washington was largely due to his planning. Rustin’s activism was rooted in his Quaker upbringing and deep belief in the concept of one human family, with all members of that family being equal. Imprisoned for militant pacifist activities during World War II, he was involved in nearly every major civil rights effort from the 1940s on. In a life filled with causes, Bayard Rustin also led crusades against atomic weapons in France and anti-Semitism in West Germany, and assisted in the independence campaigns of several African nations.

Letter (10/4/62)  from Bayard Rustin to JFK appealing for the President’s assistance in the case of an elderly conscientious objector who had refused to pay taxes after the dropping of the atomic bomb on Hiroshima, and who was now destitute because his social security payments had been cut off.

Leaflet appealing for people to participate in the March on Washington [courtesy of The Bayard Rustin Fund].

March on Washington program (pages 1-3 in this folder) at the Lincoln Memorial, 8/28/63 [courtesy of The Bayard Rustin Fund].

Telegram (9/24/63, 5:06 p.m.)  from Bayard Rustin to JFK, urging the President to send troops immediately to Selma, Alabama where 1400 people in the First Baptist Church were surrounded by local and state police and fearful for their lives.

Second telegram (9/24/63, 9:24 p.m.)  from Bayard Rustin to President Kennedy demanding federal intervention in Selma against "HUNDREDS OF ARMED WHITES DEPUTIZED BY LOCAL SHERIFF WHO HAS BROADCAST CALLS FOR LOCAL ABLE BODIED MEN TO CONVERGE ON CHURCH WITH OWN WEAPONS OR THOSE HE PROVIDES."