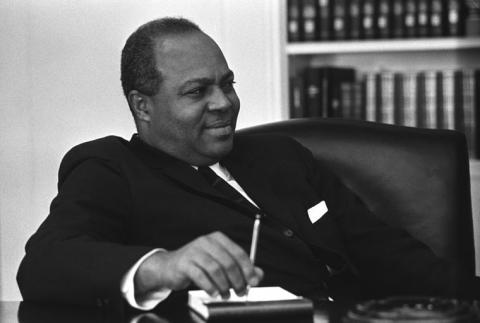 James Farmer co-founded the Congress of Racial Equality in 1942. The organization aimed at "erasing the color line through methods of direct nonviolent action." CORE followed the approach used by Gandhi in India’s fight for independence. This meant, as Farmer put it, "advising your adversaries or the people in power just what you were going to do, when you were going to do it, and how you were going to do it, so that everything would be open and above board." Accordingly, when he initiated the Freedom Rides in 1961 to challenge segregated bus facilities in the deep south, Farmer revealed details of CORE’s plans in advance. This helped focus public attention on the Freedom Riders. It also made them vulnerable to brutal attacks by angry supporters of segregation.

View copies of his correspondence with the White House:

Letter (4/26/61) from James Farmer to President Kennedy about the upcoming Freedom Ride, "designed to forward the completion of integrated bus service and accommodations in the Deep South"-- plus attached pages identifying participants, travel itinerary and origins and purpose of Freedom Ride.

Telegram (5/14/61) from James Farmer to the President: "TODAY A GREYHOUND BUS TRAVELING FROM ATLANTA TO BIRMINGHAM WAS AMBUSHED OUTSIDE OF ANNISTON ALABAMA BY FIFTY WHITE MEN, ITS TIRES SLASHED, WINDOWS SMASHED, TEAR GAS HURLED INSIDE AND THE BUS FINALLY SET AFIRE AND GUTTED BY FLAMES."

Letter (6/20/62) from James Farmer to JFK, informing the President of plans for an upcoming campaign by CORE to eliminate segregation in facilities serving interstate travelers in private automobiles.

Telegram (9/28/62; pages 12-13 in this folder) from James Farmer to JFK, expressing support by CORE of the President’s efforts to enforce federal law in Mississippi and urging him to personally escort James Meredith to his classes at the University.

Telegram (5/3/63) from James Farmer to the President deploring arrest and harsh treatment of peaceful protesters in Birmingham, Alabama.

Telegram (5/8/63) from James Farmer to JFK regarding the civil rights conflict in Birmingham: "EVEN IF GUNS OF ALABAMA SUCCEED IN QUELLING NONVIOLENT STRUGGLE IN BIRMINGHAM IT WILL RISE UP AGAIN IN PLACE AFTER PLACE UNTIL SUCH TIME AS THE PRESIDENT OF THE UNITED STATES OVERCOMES HIS FEAR OF SPEAKING OUT AND DECIDES TO ACT FORCEFULLY TO SECURE FREEDOM OF NEGRO AMERICANS."