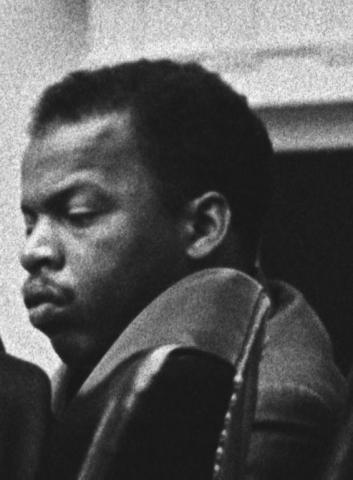 John Lewis was committed body and soul to nonviolent action. In 1960, he participated in the first mass lunch counter sit-ins in Nashville. As a Freedom Rider, he was badly beaten by a white mob in Montgomery. In 1963, at age 23, he became chairman of the Student Nonviolent Coordinating Committee. SNCC ("Snick") had been formed three years earlier at a conference convened by Ella Baker, executive director of the Southern Christian Leadership Conference. Its youthful members, impatient with the slower pace of older civil rights activists, concentrated on grassroots organizing in the South. At the March on Washington, John Lewis’ intended remarks had to be revised at the last minute because some of the other leaders thought them too inflammatory. Nonetheless, his speech drew a tremendous response from the marchers.

View copies of his correspondence with the White House:

Telegram (9/22/61; pages 46-51 in this folder) from John Lewis appealing to the President on behalf of fourteen students from Tennessee A & I University jailed in Mississippi.