The Museum is open Thursday - Sunday from 10:00 a.m. - 4:00 p.m. Starting June 21, the Research Room is open Tuesday - Thursday by appointment only. View our Visiting Safely FAQ. 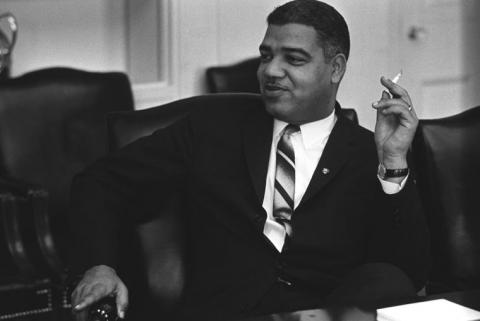 "Someone has to work within the system to change it" was how Whitney Young often explained his own position and the National Urban League’s role in the struggle for equality. Founded in 1910, the Urban League worked to improve the lives of African Americans, particularly those moving from the rural south to northern cities. It provided job training, as well as assistance with housing, education, health care and social services. Before Whitney Young took the helm in 1961, the League had not been actively identified with the civil rights movement. Young steered his organization in new directions, speaking out on issues and giving the League a major voice in public policy, while building stronger ties with government and business leaders.

Letter (5/30/61)  from Whitney Young to Frank Reeves, Assistant to the President, with carbon copy of letter (5/30/61) to Abraham Ribbicoff, Secretary of Health, Education and Welfare, recommending several "knowledgeable, experienced and outstanding Negro professionals in the field of welfare" for possible appointments within HEW or as consultants to the department -- plus letter (also 5/30/61) to David Hackett, Office of the Attorney General, with additional recommendations for delinquency project. (1A) Attachment: Seaton Manning letter to Secretary of HEW Abraham Ribbicoff, May 30, 1961; 1(B) Attachment: Whitney Young letter to David Hackett, May 30, 1961.

Telegram (8/1/62)  from Whitney Young to the President protesting the jailing of Martin Luther King Jr. and 200 other civil rights demonstrators in Albany, Georgia.

Letter (12/14/62)  from Whitney Young to the President, thanking him "for the gift of one of the pens used in the issuance of the recent Executive Order barring discrimination in federally-assisted housing programs."