Due to the coronavirus public health emergency, the John F. Kennedy Presidential Library and Museum will be closed until further notice. 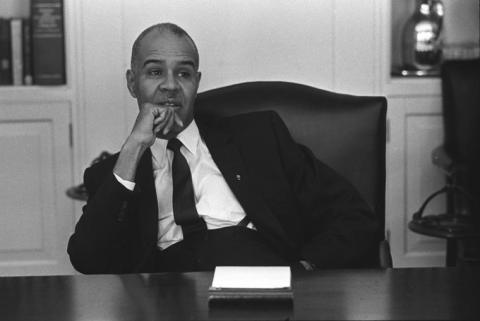 Introduced at the August 1963 March on Washington as "the acknowledged champion of civil rights in America," Roy Wilkins headed the oldest and largest of the civil rights organizations. The NAACP, founded in 1909, aimed to achieve by peaceful and lawful means equal rights for all Americans. Since the 1930s, it had focused its resources on challenging "Jim Crow" statutes in the courts, winning the landmark decision in Brown v. Topeka Board of Education in 1954, the first major crack in the wall of segregation. By the early 1960s, with a new generation of activists trying a more confrontational approach, Roy Wilkins remained a moderate but insistent voice for progressive action, with a direct line to the White House.

Letter (1/24/61) from Roy Wilkins to JFK after attending the President’s inauguration.

Letter (4/5/61) from Roy Wilkins to Harris Wofford, President Kennedy’s Special Assistant for Civil Rights, with a critique of the administration’s civil rights record

Telegram (6/22/61) from Roy Wilkins to the President reacting to appointment of federal judge in Mississippi.

Letter (8/3/61) from Roy Wilkins to JFK during the Berlin crisis regarding "the fact that in a goodly number of states the National Guard is closed to Negro citizens" and urging that "appropriate steps be taken without delay to insure the inclusion, on a non-discriminatory basis, of all citizens in all aspects of the spiritual and physical mobilization you have ordered."

Telegram (12/14/61) from Roy Wilkins to the President, urging him to issue executive order banning racial discrimination in federally assisted housing.

Telegram (12/28/61) from Roy Wilkins to the President on the postponement of executive order on discrimination in housing.

Telegram (7/30/62) from Roy Wilkins to the President urging him “To speak out in condemnation of the persecution in Albany, George, of Reverend Doctor Martin Luther King and his associates for peacefully protesting racial injustices.”

Letter (3/18/63) from Roy Wilkins to JFK regarding racial discrimination around the area of Cape Canaveral, Florida: "There is a particular irony when the soaring aspirations exemplified in the United States government’s programs for probing the far reaches of space are contrasted with the harsh reality faced by Negroes who are contributing to those programs..."

Letter (5/15/63) from Roy Wilkins to JFK regarding Prince Edward County, Virginia, where public schools had been closed since 1959 to avoid complying with desegregation orders following the Supreme Court decision in Brown v. Board of Education.