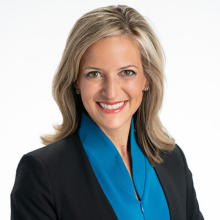 In December 2020, shortly after the presidential election, Michigan Secretary of State Jocelyn Benson was at home putting up Christmas decorations with her young son when armed protestors massed in front of her house demanding that Michigan's presidential election result be reversed. Protesters called Benson a "traitor” and a “criminal” for defending the certification of Michigan's accurate results, which favored Joe Biden. Benson, the state's chief elections officer, did not waver, and defended the will of Michigan voters and assured them that she would protect and defend the integrity of Michigan's vote in accordance with state law. Throughout the 2020 election cycle, Benson repeatedly refused to back down from fulfilling the duties of her office, even as threats and harassment from then-President Trump and his allies grew increasingly aggressive. Benson continues to speak out about the risks to free and fair elections in Michigan and nationwide, as Trump supporters continue to perpetuate false claims and work to seize control of state and local election processes from duly elected or appointed public servants.