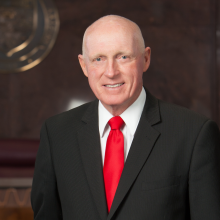 Following the 2020 presidential election, Rusty Bowers, a pro-Trump Republican, resisted intense pressure from Trump and Rudy Giuliani and refused to go along with an illegal scheme to replace Arizona’s legal slate of electors with a false slate of electors who would elect Trump. “As a conservative Republican, I don’t like the results of the presidential election,” Bowers said. “I voted for President Trump and worked hard to reelect him. But I cannot and will not entertain a suggestion that we violate current law to change the outcome of a certified election.” For his decision of conscience, Bowers endured persistent harassment and intimidation tactics from Trump supporters, and later survived an attempt to recall him from the legislature. In January 2022, Bowers again acted to protect the integrity of Arizona elections by stopping a Republican-sponsored bill that would have allowed the legislature to overturn the results of an election. He remains a target for pro-Trump partisans.