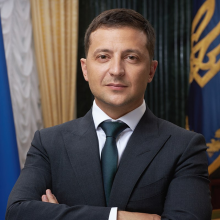 In February 2022, as Russia mounted a massive, unprovoked military assault on Ukraine, President Volodymyr Zelenskyy marshaled the spirit, patriotism, and untiring sacrifice of the Ukrainian people in a life-or-death fight for their country - a struggle that endures to this day. From the first moment of the invasion, Zelenskyy and his family became targets for assassination by Russian forces. In the face of this constant danger, Zelenskyy has led a courageous defense of democratic ideals and political independence. With candor and clarity, he has focused the eyes of the world on the existential threat facing Ukraine, and on the need for robust, uncompromising international engagement and cooperation to safeguard all democratic societies. His principled leadership has strengthened the resolve of Ukrainians and people around the globe to protect and defend the fragile human right of self-determination.