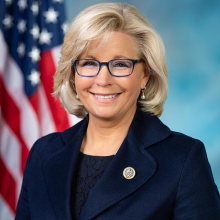 Prior to the election in 2020, Representative Liz Cheney was elected by her colleagues to be chair of the House Republican Conference, making her the third-ranking Republican in the U.S. House of Representatives, and the highest-ranking Republican woman in the history of the House. She has been one of the most conservative members within the Republican Conference.  After the election, however, when President Trump falsely claimed that the election was stolen, she repeatedly called on the President to respect the rulings of the courts and his oath of office, and to publicly support the peaceful transfer of power. When the President instead rejected the lawful, certified outcome of the election, she broke with most in her party, urged fidelity to the Constitution, and stood her ground with honor and conviction. She stood against the lawlessness and violence of January 6th, and voted to impeach President Trump, concluding: "The President of the United States summoned this mob, assembled the mob, and lit the flame of this attack. Everything that followed was his doing.” Cheney received numerous death threats after casting her vote in favor of impeachment, and yet refused to take the politically expedient course that most of her party embraced. Because she would not remain silent or ignore the events of January 6th, Cheney's congressional colleagues stripped her of her leadership position in the GOP caucus. She now serves as the Vice Chair of the Select Committee investigating the January 6 insurrection, and remains a consistent and courageous voice in defense of democracy.