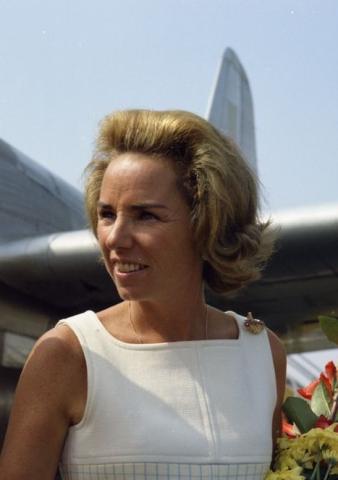 Ethel’s father, George Sr., started work as an eight dollars a week railroad clerk. He, along with some co-workers, built a small coal and coke business into a diversified privately owned enterprise, the Great Lakes Coal & Coke Co., which eventually became Great Lakes Carbon Corporation. As a result, the Skakels became extremely wealthy.

In 1934, when Ethel was five years old, the family moved east, finally settling in Greenwich, Connecticut in 1936 where her father purchased a three-story, thirty-one room English country manor house on Lake Avenue where she was raised with her six siblings.

Ethel attended the all-girls Greenwich Academy in Greenwich, and Convent of the Sacred Heart in the Bronx. In September 1945, Ethel began her education at Manhattanville College of the Sacred Heart. It was here that she was introduced to Jean Kennedy, with whom she became fast friends and eventually roommates.

In 1945, 17-year-old Ethel was introduced to Jean's brother, Robert F. Kennedy (Bobby) during a skiing trip to Mount Tremblant Resort in Quebec, Canada. At the time, Bobby was dating Ethel's sister, Patricia Skakel. Eventually that relationship ended and Robert and Ethel started seeing each other.

Ethel campaigned for John F. Kennedy in his 1946 campaign for US Congress, and wrote her college thesis on his book Why England Slept. Bobby and Ethel became engaged in February 1950 and were married on June 17, 1950 at St. Mary’s Catholic Church in Greenwich. Their first child, Kathleen, was born on July 4, 1951.

After Robert graduated with his law degree from the University of Virginia Law School, the family settled in the Washington, DC area and Robert went to work for the Department of Justice.

In 1955, Ethel suffered a personal tragedy when both her parents were killed when their private airplane crashed.

In 1956, the Robert F. Kennedys purchased Hickory Hill from Robert’s brother John and his wife Jacqueline. The 13 bedroom, 13 bath home was situated on six acres in McLean, Virginia.

In 1957, Ethel's interest in politics was heightened after her husband became chief counsel to the Senate Select Committee. Two years later, she joined forces with other members of the Kennedy clan to campaign for Robert's brother, John, during his run for the US presidency. In 1960, John F. Kennedy won the election, at which time he appointed Robert to the post of attorney general.

Following the 1963 assassination of John F. Kennedy, Ethel supported her husband while he campaigned for and won a seat in the US Senate representing the state of New York. Like his brother, Robert also decided to enter the presidential race, but was assassinated in June 1968, immediately after he won the California Democratic primary. Six months after her husband’s death, Ethel gave birth to their 11th child, Rory.

During the late 1970s, with a renewed commitment to public service, Ethel focused much of her time and energy on various social causes, most notably the Bedford Stuyvesant Restoration Project. In 1984, she lost her son David who died from an accidental drug overdose, and in 1997, her son Michael died in a skiing accident.

Ethel is the founder of the Robert F. Kennedy Memorial Centre which attempts to continue the works of Robert F. Kennedy through Human Rights Awards and Journalism Awards. She also co-chairs the Coalition of Gun Control, and is involved with other human rights organizations.