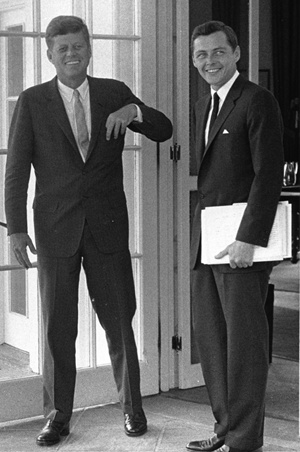 Stephen Edward Smith was born in Brooklyn on September 24, 1927, the youngest of five boys. He attended Polytechnic Prep, where he was an outstanding athlete. While studying history and social sciences at Georgetown University, he met his future wife of thirty-four years, Jean Kennedy. They married in 1956. Their children are Stephen Jr., William, Amanda, and Kym.

In 1960, Stephen Smith became the political advisor and finance chairman for the presidential campaign of John F. Kennedy. He also managed the presidential campaigns of Robert and Edward Kennedy. After the death of Joseph P. Kennedy Sr., he became the Chairman and Chief Executive Officer of Joseph P. Enterprises, Inc., responsible for the Kennedy family’s financial interests.

Stephen Smith died on August 19, 1990. On February 4, 1991, the new program facilities wing of the Kennedy Library was named in his honor to recognize his groundbreaking work on behalf of the John F. Kennedy Presidential Library and Museum.