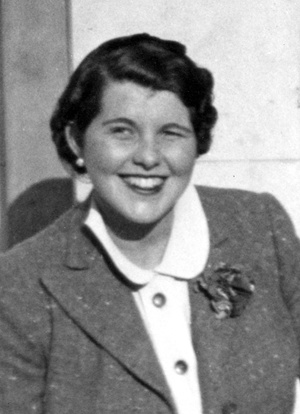 Rosemary Kennedy, born Rose Marie Kennedy on September 13, 1918, was the third child and eldest daughter of Joseph and Rose Kennedy. She was slower to crawl, slower to walk and to speak than her brothers, and she experienced learning difficulties when she reached school age. Despite her apparent intellectual disabilities, Rosemary participated in most family activities. In the diary she kept as a teenager she described people she met, dances and concerts she attended, and a visit to the Roosevelt White House. When her father was appointed US Ambassador to Britain in 1938, Rosemary went to live in London and was presented at court along with her mother and sister Kathleen.

But when the family returned to the United States in 1940, “Rosemary was not making progress but seemed instead to be going backward,” as her sister Eunice later wrote. “At 22, she was becoming increasingly irritable and difficult.” The following year, after being persuaded that a lobotomy would help to calm his daughter and prevent her sometimes violent mood swings, Joseph Kennedy authorized the operation. The relatively new procedure, which at the time seemed to hold great promise, left Rosemary permanently incapacitated and unable to care for herself. On the recommendation of Archbishop Cushing, Rosemary was sent to St. Coletta’s School for Exceptional Children in Jefferson, Wisconsin, where she would live for the rest of her life.

Eunice Kennedy Shriver had a particularly close relationship with her older sister, and great empathy for Rosemary and others who faced similar challenges. In 1962, Mrs. Shriver started a summer day camp in her own back yard for children and adults with intellectual disabilities, a camp which evolved into Special Olympics, now a global competition that involves 1.4 million athletes from 150 countries.

Rosemary Kennedy died on January 7, 2005 at age 86. Eunice Shriver said in her eulogy that Rosemary had left a legacy that was long and deep. Along with inspiring Mrs. Shriver’s own work with Special Olympics, Rosemary had inspired her brother, President John F. Kennedy, to initiate sweeping legislation designed to improve the quality of life for Americans with disabilities. She had inspired her sister Jean Kennedy Smith to start Very Special Arts and her nephew, Anthony Shriver, to start Best Buddies. Hospitals, schools and other such facilities around the world have been named in honor of Rosemary Kennedy.