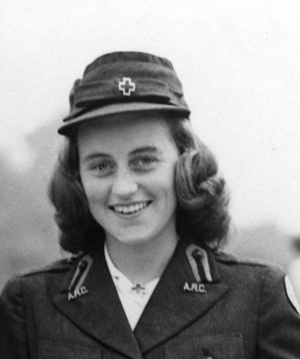 Kathleen “Kick” Kennedy was born on February 20, 1920 in Brookline, Massachusetts, the second daughter and fourth child of Joseph and Rose Kennedy. She moved with her family to Bronxville, New York in 1927 and attended the private Riverdale Country School. After graduating from Riverdale, she went to the Noroton Convent of the Sacred Heart in Greenwich, Connecticut and spent a year abroad studying at the Holy Child Convent in Neuilly, France.

Shortly after finishing school, Kathleen Kennedy sailed to England with her family when her father was appointed Ambassador to Great Britain in 1938. There she made her formal entrance as a debutante on May 12, 1938. During her time in England she worked on various committees for social events.

Kathleen Kennedy returned to the United States with her mother and siblings in the fall of 1939 after Great Britain declared war. She briefly attended the Finch School in New York and later Florida Commercial College.

While in college, Kathleen Kennedy began volunteering for the Red Cross in New York in the summer of 1940. She planned benefit luncheons and fashion shows for the Allied Relief Fund to aid British seamen disabled in the war.

Kathleen Kennedy decided to leave school in 1941 to begin working for the Times-Herald newspaper in Washington, DC. She was a research assistant to Frank Waldrop, the Executive Editor of the newspaper. She also assisted with reporter Inga Arvad’s column “Did You Happen to See…,” which profiled government officials. Kathleen was eventually promoted to reviewing plays and movies in her own by-lined column and took over Ms. Arvad’s column when she left the newspaper.

After her experience at the Times-Herald, Kathleen Kennedy decided to rejoin the war effort by volunteering again for the Red Cross, this time in London. She attended special Red Cross courses at American University and then sailed for London on June 25, 1943. Her official position was the Program Assistant at Hans Crescent, a club in London that offered food, supplies and accommodations for officers.

On May 6, 1944, Kathleen Kennedy married William “Billy” Cavendish, the Marquess of Hartington, whom she had met during her first trip to England in 1938. Billy, Lord Hartington, a member of the British army, was called up on June 13, four weeks after their wedding. He was killed in combat on September 10, 1944.

Kathleen Kennedy, Lady Hartington remained in England after the death of her husband. She had resigned her position at Hans Crescent a few days before her wedding, but returned as a Red Cross volunteer for a short period in the fall of 1944 at the Charles Street Club. After the end of the war, she briefly traveled back to the United States to visit her family, but returned to London to live there permanently.

Lady Hartington died on May 13, 1948 in a plane crash in France. She is buried on the Cavendish family burial grounds, in the Church at Edensor outside of Chatsworth, England.

In October 1957, her parents and siblings dedicated a new physical education building in her honor at Manhattanville College in Purchase, New York.