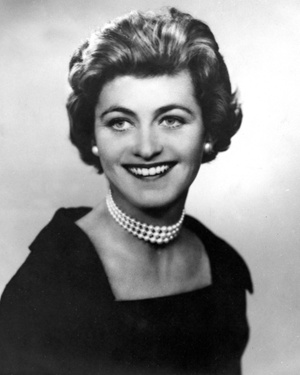 Jean Ann Kennedy, the eighth child and youngest daughter of Rose and Joseph Kennedy, was born on February 20, 1928 in Boston, Massachusetts. She attended Sacred Heart schools in England and the United States, and graduated from Manhattanville College, where she majored in English. After her brother Joe was killed in 1944 in World War II, Jean was chosen in 1945 to christen the USS Joseph P. Kennedy Jr., a newly commissioned Navy destroyer named for her brother.

In 1956, Jean Kennedy married Stephen E. Smith, an executive in a transportation company founded by his grandfather, and they took up residence in New York City. Mr. Smith died in 1990. They had four children together: Stephen Jr., William, Amanda, and Kym.

Jean Kennedy Smith’s first experience in national politics came in 1960, as she traveled around the country for her brother, Senator John F. Kennedy, in his campaign for the presidency. She became a political figure in her own right three decades later, when President Clinton nominated her to be US Ambassador to Ireland on March 17, 1993. After confirmation by the Senate, she assumed her duties that June, serving until 1998.

Mrs. Smith had accompanied President Kennedy on his famous visit to Ireland in 1963, and the Irish government and the Irish people enthusiastically welcomed her return as America's ambassador. She took an active interest in encouraging a peaceful settlement in the long-standing conflict in Northern Ireland, and one of her principle achievements was in persuading the Clinton administration to grant a visa to Gerry Adams, President of Sinn Fein, the political arm of the Irish Republican Army, to visit the United States in 1994. The visit is widely regarded as a key step in the success of the peace process in the years that followed.

Starting in 1964, Mrs. Smith was a member of the Board of Trustees of the Joseph P. Kennedy Jr. Foundation, which provides grants to promote awareness and advocacy in the field of mental retardation. She has also served on the boards of the John F. Kennedy Center for the Performing Arts and the Carnegie Endowment for International Peace.

In 1974, Jean Smith founded Very Special Arts, an educational affiliate of the Kennedy Center that provides opportunities in the creative arts for persons with disabilities. Her book, Chronicles of Courage: Very Special Artists, written with George Plimpton, was published by Random House in April 1993.

In addition to a number of honorary degrees, Ambassador Smith received various awards, including the Jefferson Award for Outstanding Public Service from the American Institutes for Public Service, the Margaret Mead Humanitarian Award from the Council of Cerebral Palsy Auxiliaries, and the Presidential Medal of Freedom.