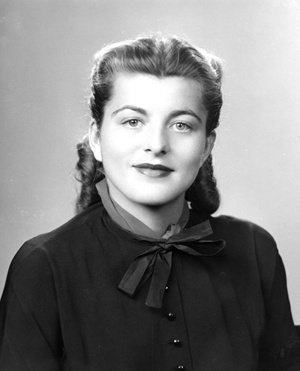 Patricia Kennedy was born in Brookline, Massachusetts on May 6, 1924, the sixth child and fourth daughter of Rose and Joseph Kennedy. Patricia attended the Roehampton Sacred Heart Convent School, a boarding school on the outskirts of London, while her father was Ambassador to Great Britain. She was a good student, especially in mathematics. In 1927, her family moved to Bronxville, New York, where she studied at the Maplehurst Sacred Heart Convent School. She then attended Rosemont College in Rosemont, Pennsylvania where she directed and acted in various plays and theatrical spectacles. She received a B.A. from Rosemont in 1945.

After graduation she decided to pursue her interest in theatrical activities. She began working as an assistant in NBC’s New York production department. She then moved to Los Angeles to work as an assistant for Kate Smith’s radio program, and later for Father Peyton’s Family Theater and Family Rosary Crusade.

On April 23, 1954, she married Peter Lawford, an English actor whom she had met through her brother John in 1949. The couple had four children: Christopher, Sydney, Victoria, and Robin. Patricia and Peter Lawford divorced in 1965.

In addition to her work in show business, Patricia Lawford was a tireless supporter of her brothers’ political campaigns. For JFK’s Congressional race in 1946, she and her sisters and mother held a number of tea parties in which they discussed John’s boyhood and his World War II experience. In 1952 the “Kennedy teas” contributed to JFK’s election to the US Senate in an upset win over the incumbent, Henry Cabot Lodge Jr. During the 1960 presidential campaign, she traveled around the country speaking on her brother’s behalf, and she would later play an active role in the senate and presidential races of her brothers Robert and Edward. Having been particularly close to Robert, she gathered together memories of him from many people in The Shining Hour, which was privately printed for family and friends after his death.

In 1966 Patricia Lawford moved with her children to New York City. There she was actively involved in supporting the city’s arts scene. She devoted her time to charity auctions and fund-raisers for the arts. Mrs. Lawford founded the National Committee for the Literary Arts, which arranges author lectures and scholarships. She also worked with the National Center on Addiction and with the Kennedy Library on its museum exhibits.