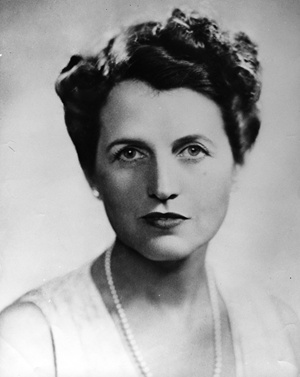 She was first introduced to politics as a child. When she was 5, her father was a congressman. By the time she turned 15, Honey Fitz was one of the most popular and colorful mayors Boston had ever known. He once took Rose and her sister Agnes to visit President William McKinley in the White House, and the president at one point said to Agnes, "You're the prettiest girl who has entered the house." Rose remarked later, "I knew right then that I would have to work hard to do something about myself." Her graduation from Dorchester High School in June 1906 was front-page news in the Boston newspapers as Mayor Fitzgerald proudly gave his daughter her diploma.

Rose had been accepted at Wellesley College during her junior year in high school, but her father enrolled her in the Convent of the Sacred Heart, in Boston, at the suggestion of Archbishop William O'Connell. At the age of 90, in an interview with Doris Kearns Goodwin, Mrs. Kennedy said her "greatest regret is not having gone to Wellesley College. It is something I have felt a little sad about all my life." However, she eventually grew fond of the convent school, and she said the religious training she received there became the foundation for her life.

In her teens Rose became acquainted with Joseph P. Kennedy at Old Orchard Beach in Maine where their families were vacationing together. On October 7, 1914, they were married in a modest ceremony in a small chapel at the residence of Cardinal O'Connell, who officiated. The couple's first home was a three-story gray building on Beals Street in Brookline, now a national historic site.

At the time of their marriage, Joseph Kennedy was making $10,000 a year as a businessman. When the family left Brookline and moved to Riverdale, New York, about 10 years later, he was a multimillionaire, in part through his dealings as a lone wolf financier and investor.

Mrs. Kennedy was considered by many to be a model parent. "Children," she said, "should be stimulated by their parents to see, touch, know, understand and appreciate." She made the family a self-sustaining unit, with members allowed to go their own way while maintaining interest in the lives of the others. A friend of Mrs. Kennedy, Mary Jo Clasby, once said, "When she would teach you something you would have to do it yourself. She would really want you to do it, so you could find out for yourself it was possible."

Mrs. Kennedy often retold stories from history books to her children -- about Bunker Hill, the Battle of Concord, and Plymouth Rock -- then took them on outings to see those sites. She also told them stories from the Bible. "I always told the children that if they were given faith when they were young, they should try to nurture it and guard it, because it's really a gift that older people value so much when sorrow comes," she once said.

One of Mrs. Kennedy's main problems was keeping tabs on her large family. She kept careful records of all her children on index cards, and had an extensive filing system that she said helped her remember each one's physical condition. She said the cards weren't the product of American efficiency, but "Kennedy desperation." They listed weights, shoe sizes, dental treatments, eye examinations and illnesses each child had.

As Mrs. Kennedy's younger sons grew older, they began to look toward the political scene, and she did little to discourage them. She had learned from her father how to be at ease in public and how to conduct political campaigns, skills she used in her sons' numerous battles. "If you're in politics, I suppose you always work to get to the top," she once said. When her son John ran in 1946 for the Massachusetts 11th Congressional District seat, the one previously held by Honey Fitzgerald, Rose was the first to spur him on. “She was the greatest pol we had in 1946," said Dave Powers, a longtime friend of the family.

She loved politics, especially the backroom strategies and behind-the-scenes wheeling and dealing. "She knew all the nuts and bolts," Pierre Salinger once said, noting that she made prospective voters feel more important by preparing her remarks carefully and addressing them on intimate terms. Mrs. Kennedy's love of history often infused her political discussions. "My view is a historical one," she said. "I tend to take the long view, in the light of history, of events."

After John's victory in 1946, his next big battle was for the US Senate. During his 1952 campaign to unseat Henry Cabot Lodge, Rose Kennedy was the hostess at many "Kennedy teas" sponsored by the Democratic Party. Newspapers reported that at times the campaign resembled a family feud -- the Kennedys vs. the Lodges.

In her son's 1960 presidential campaign, Mrs. Kennedy again did her utmost. "For six weeks," Powers said, "every night I'd pick her up and we'd go to meetings. Maybe the first place would be an abandoned North End garage, and she'd put on a babushka and talk to the women about children. And the next stop might be West Roxbury, so in the car she'd change her shoes and maybe put on a mink jacket," he said.

But during Robert's fateful presidential campaign in 1968, she made perhaps her only political misstep. Just before the Indiana primary, she was questioned about the large sums her family was spending on his behalf. "It's our money and we're free to spend it any way we please," she said. "It's part of this campaign business. If you have money, you should spend it to win. The more you can afford, the more you'll spend." Her comments were carried by newspapers nationwide. Later that spring, during the Oregon primary race, she said: "I don't talk about high finance anymore. If I did, they'd send me home tonight."

Mrs. Kennedy rarely talked publicly about her personal grief. But once she remarked to a friend: "Wasn't there a book about Michelangelo called 'The Agony and the Ecstasy'? That's what my life has been."

During World War II, her eldest son, Joseph Jr., a Navy pilot, was killed in action on August 12, 1944, when the plane he was flying on a mission exploded over the English Channel. Her second-oldest daughter, Kathleen, wife of the Marquess of Hartington, who was also killed during World War II, died May 13, 1948, in a plane crash in France. Her second son, John, was assassinated in Dallas on November 22, 1963, during his first term as president. At the funeral in Washington, she turned to Ethiopia's Emperor Haile Selassie and said: "It's wrong for parents to bury their children. It should be the other way around."

Her third son, Robert, who was US Attorney General under his brother and later a Democratic senator from New York, was assassinated in Los Angeles on June 5, 1968, while campaigning for president. Her eldest daughter, Rosemary, spent most of her adult life in a home for intellectually disabled people. Mrs. Kennedy's husband suffered a stroke in 1961, and it left him an invalid until his death eight years later.

"Willpower, just willpower and doing what's necessary is what keeps me going," Mrs. Kennedy once said. And despite all the tragedies she lived to see, she wrote in her 1974 autobiography: "There have been times when I felt I was one of the most fortunate people in the world, almost as if Providence, or Fate, or Destiny, as you like, had chosen me for special favors."

When asked what were the greatest thrills of her life, one of the first Mrs. Kennedy mentioned was being at her son John's inauguration in January 1961 as President Eisenhower's successor. But she recalled other highlights few people might remember. In the late 1930s, her husband was named US ambassador to Britain. While living overseas, the Kennedy family was invited to attend the coronation of Pius XII in March 1939. They enjoyed a private audience with the new Pope. In 1951, she had the rare title of papal countess conferred on her by the Vatican in recognition of her "exemplary motherhood and many charitable works." She was only the sixth woman from the United States to have the title bestowed upon her by the Roman Catholic Church.

Aside from the most important aspects of Rose Kennedy's life -- family, religion and politics -- she was also interested and active in many other areas. Much of her time in later years was devoted to securing public support for the campaign to enlighten the public about mental retardation and its causes. The Joseph P. Kennedy Jr. Foundation has donated millions of dollars since 1946 to hospitals, institutions, and day-care and research centers throughout the United States.

Mrs. Kennedy spoke several languages fluently and was an accomplished pianist. Petite and slim, she dressed stylishly. During the '30s she was named the best-dressed woman in public life by a poll of fashion designers.

For relaxation, she played golf or swam off the beach at the family compound on Cape Cod. She could often be seen, well past her middle-age years, carrying her own clubs on the difficult Hyannis Port Country Club golf course, playing nine holes alone against the biting gusts of sea air. During the 1970s, Mrs. Kennedy loved to walk village streets alone, unrecognized by most passersby. But a stroke in 1984 left her in a wheelchair.

Perhaps the most fitting tributes to Mrs. Kennedy's life are those given by her children and grandchildren. In 1987, celebrating his grandmother's 97th birthday, Rep. Joseph Kennedy II spoke of her as "the magnet that always pulled all of us together as a family, ever since I was a little boy. We could look to her when things were going very well, and she'd give us a smile and encouragement. When things were not going so well, we'd get the same thing. Grandma's so strong and just a tremendous inspiration to all of us."

[This biography is excerpted from an obituary in The Boston Globe , January 23, 1995.]