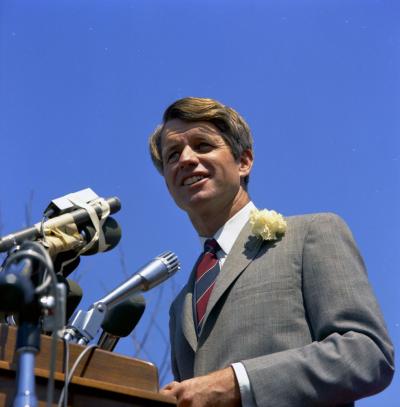 The following information about Robert F. Kennedy is arranged alphabetically by topic. For more information please contact Kennedy.Library@nara.gov. Have a research question? Ask an Archivist.

Capital Punishment: In letters to constituents throughout 1968 he expressed his strong willingness to support a bill then under consideration for the abolition of the death penalty. He declared this willingness in letters written shortly before his death.

Death: After victory statement and shortly after midnight June 5, 1968 was shot at the Ambassador Hotel in Los Angeles. Died 1:44 am, Pacific Time on June 6 at Good Samaritan Hospital in L.A. Body was flown back to NY for requiem high mass at St. Patrick's Cathedral, then by train to Washington for burial at Arlington National Cemetery June 8. President Johnson declared June 9 a national day of mourning.

Education, Early: Attended a large number of schools (at least 12 by his own estimate) due to family movement. Schools included St. Paul's, Portsmouth Priory. Graduated from Milton Academy in 1942 after spending 1 year there.

Education, Post-Secondary: Harvard University, B.A. in Government (1948); University of Virginia School of Law, J.D. (1951; graduated 56th in a class of 125). Admitted to the Massachusetts Bar.

Internal Security Division: Briefly served as attorney with the Division, then the Criminal Division of the United States Justice Department, 1951-1952.

Mount Kennedy: With a three-man team, Robert F. Kennedy reached the summit of the 13,000 foot (up to that point, the highest unclimbed peak in North America) Canadian mountain near the US border on March 24, 1965. It was named after President John F. Kennedy on January 4, 1965.

Senate Select Committee on Improper Activities: Chief Counsel to Committee in the Labor or Management Field (aka, "Rackets Committee"), 1957. Resigned from Committee in 1960 to manage John F. Kennedy's presidential campaign.