It is that quality of the Irish--that remarkable combination of hope, confidence and imagination--that is needed more than ever today. The problems of the world cannot possibly be solved by skeptics or cynics, whose horizons are limited by the obvious realities. We need men who can dream of things that never were, and ask why not. It matters not how small a nation is that seeks world peace and freedom, for, to paraphrase a citizen of my country, 'the humblest nation of all the world, when clad in the armor of a righteous cause, is stronger than all the hosts of Error.'" - President Kennedy's address to the Irish Parliament June 1963. 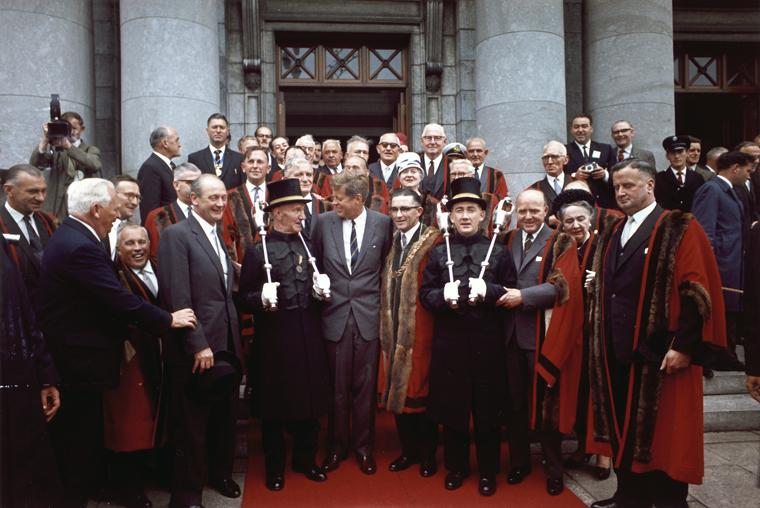 This special exhibit explored President Kennedy’s relationship to his ancestral homeland, and featured a large selection of documents, photographs and film footage relating to his Irish heritage and his June 26-29, 1963 state visit to the country of his forbears as well as tokens presented to the president by the people of Ireland.

President Kennedy relished his Irish heritage, and during his historic visit to Ireland remarked to the people of Limerick, “This is not the land of my birth but it is the land for which I hold the greatest affection.”

The President’s eight great-grandparents all migrated to Boston, Massachusetts during the devastating Potato Famine of the late 1840’s. By the end of the century, both of President Kennedy’s grandfathers had become successful Boston politicians. Patrick J. Kennedy was a tavern owner and later a banker who served in both Houses of the Massachusetts Legislature and was the political "boss” of a ward in Boston. John F. ("Honey Fitz") Fitz­gerald, a colorful politician who served in the Massachusetts State Senate and the U.S. House of Representatives, was also mayor of Boston for three terms.

In remarks to the people of New Ross, County Wexford on June 27, 1963, President Kennedy spoke of his treasured ancestry:

When my great grandfather left here [in 1848] to become a cooper in East Boston, he carried nothing with him except two things: a strong religious faith and a strong desire for liberty. I am glad to say that all of his great-grandchildren have valued that inheritance.

So effusive was his reception by the people of Ireland that President Kennedy remarked before departing Galway, “You send us home covered with gifts, which we can barely carry, but most of all you send us home with the warmest memories of you and your country.”

The exhibit displayed many of the items bestowed on the President by the people of Ireland and also some of the President's personal items that reflect his Irish heritage. 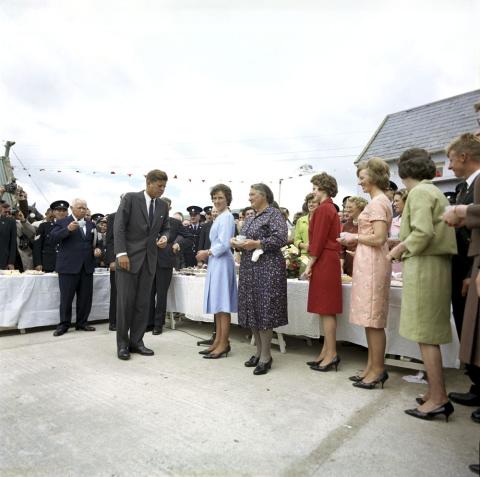