Shaping Up America: JFK, Sports and The Call to Physical Fitness

We do not want our children to become a generation of spectators. Rather we want each of them to be a participant in the vigorous life." John F. Kennedy 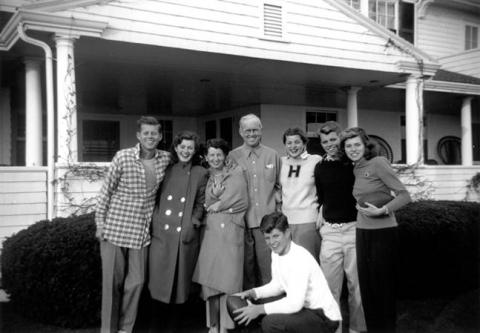 All four Kennedy brothers played football at Harvard. Robert and Edward both were Harvard football lettermen. Joe Jr. was an outstanding player at Choate School and though he did not receive a major letter he was an active member of the Harvard Squad. JFK gamely pursued a playing role in Harvard's football program but did not progress beyond the Junior Varsity as illness and injury in his freshman year curtailed his involvement. Robert's teammates remembered and admired him for his courageous and resolute play at the end position. In later years all the Kennedy brothers, and in some cases their sisters and wives too, famously enjoyed games of touch football.

Health problems often affected young Jack Kennedy's own involvement, but with undiminished spirit he remained determined to be an energetic participant as well as an enthusiastic follower of sports. The children of Joe and Rose Kennedy grew up in a family of baseball fans. Their grandfather John F. Fitzgerald was a leading member of the "Royal Rooters" fan clubs of both the Boston Red Sox and Boston Braves. JFK, encouraged by his longtime associate Dave Powers, followed the Red Sox closely as did his brother Ted. He was part of the Harvard sailing crew that won the Eastern Collegiate Championship, and also won in individual sailing competition. He swam and played golf and football for the junior varsity at Harvard and tried his hand at boxing. In later years, he remained an accomplished golfer and, despite chronic back pain, he continued to enjoy touch football, tennis, and softball with family and friends, and to sail Victura, his 26 foot sloop in Nantucket Sound.

Jack Kennedy took up golf as a young man and enjoyed the sport throughout his life. His sometimes frenetic collegiate sporting activity at Harvard College included golf, and as member of the freshman team he represented the Crimson in the all important Yale match. Possessed of a natural and graceful swing, he struck the ball well and has been described by golfing authorities as the most accomplished of presidential golfers. He played regularly at the Hyannis Golf Club and Palm Beach Golf Club with his father, brothers and friends, and as a senator and president he favored the Burning Tree Club and Chevy Chase Clubs in Maryland.

His own involvement and his family's association with such athletic activity provided a good springboard for Kennedy to address the nation's declining physical fitness. As president, he re-invigorated The President's Council on Physical Fitness, encouraging Americans to take physical fitness seriously. The effort, associated with the future health and competitive readiness of America, was seen as very much part of the "New Frontier."

President Kennedy challenged the nation to become more active, but this activism and love of sports was embraced by all members of the Kennedy Family. While the President was challenging the US Marines to walk 50 miles in 20 hours and challenging high school students to earn awards from the President’s Council on Physical Fitness, his sister Eunice Kennedy Shriver was working with disabled children in a “camp” at her Maryland home. This camp, which taught the children habits of physical fitness and how to play organized sports, is credited as the genesis for what would later become the Special Olympics.