In Her Voice: Jacqueline Kennedy, The White House Years 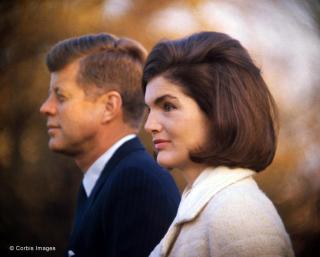 The John F. Kennedy Presidential Library and Museum is proud to present a new exhibit highlighting Mrs. Kennedy's 1964 oral history interview. Sealed for 47 years and published in September 2011, it is a series of wide-ranging conversations with historian Arthur Schlesinger, Jr., in which Mrs. Kennedy reveals her thoughts and impressions on topics spanning John F. Kennedy's early campaigns to the Cuban Missile Crisis.

The conversations cover Mrs. Kennedy's impressions of world leaders and events, her role as First Lady, and her life as a wife and mother living inside the White House.

Selections from the Exhibit

In the spring of 1964, a few months after President Kennedy's death, Jacqueline Kennedy recorded a series of interviews with historian and family friend Arthur Schlesinger Jr. At the age of thirty-four, with the White House years behind her, she was speaking for the historical record—to preserve and shape her husband's legacy. The interviews, held on deposit here at the Kennedy Library, were sealed for forty-seven years. Jacqueline Kennedy Onassis died in 1994. In 2011, the 50th anniversary year of the Kennedy Presidency, her daughter, Caroline Kennedy, decided it was the right time to share these conversations with the public. Selections are featured in this exhibit.

Mrs. Kennedy had a rare combination of gifts—intelligence, courage, discipline, artistic creativity, and a style all her own. She had an adventurous spirit and was an accomplished horsewoman who lived life at a full gallop. Her oral history interview reflects these gifts. As wife of the President, she witnessed historic events at close range and had first-hand experience with world leaders. She had a clear sense of her place in history and significant accomplishments as First Lady, yet she also believed that her primary obligation was to her family. This exhibit joins Mrs. Kennedy's words—her unique way of seeing the world—with the photographs, documents, and artifacts she describes, adding new illumination both to the great events and personalities of the 20th century, as well as to the sensibilities of the woman describing them. 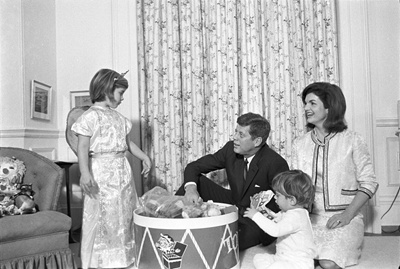 In her 1964 oral history interview, Jacqueline Kennedy opened a window into the family quarters at the White House, revealing an intimate, multifaceted portrait of her husband, and chronicling the details of domestic life with their children, Caroline and John Jr., that made the years in the White House what Mrs. Kennedy called "the happiest time."

"It was really the happiest time of my life. It was when we were the closest-- I didn't realize the physical closeness of having his office . . . in the same building and seeing him so many times a day." - Jacqueline Kennedy

"I am the man who accompanied Jacqueline Kennedy to Paris" 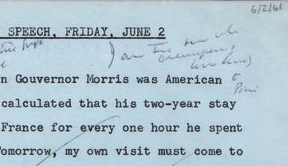 President Kennedy's remarks at a news conference held at the Palais de Chaillot in Paris, first page, June 2, 1961. At the top of the page, the President scribbled the words to introduce himself: "I am the man who accompanied Jacqueline Kennedy to Paris . . ."

The Kennedys captivated the French people. On May 31, 1961, when the couple arrived in the French capital for a three-day State visit, nearly half a million people lined the streets of Paris to catch a glimpse.

Over the next two days of the visit, as the President went from meeting to meeting, Mrs. Kennedy maintained a schedule of her own events. Already admired for her style and beauty, she bedazzled the public with her knowledge and affinity for the French language, culture, and history. She was a particular sensation, and the President delighted in her success.

"Suddenly, everything that had been a liability before—your hair, that you spoke French, you didn't just adore to campaign . . . everyone thought I was a snob and hated politics . . . And when we got in the White House all the things that I had always done, suddenly became wonderful. . . and I was so happy for Jack, especially now that it was only three years together that he could be proud of me then. Because you know, it made him so happy—it made me so happy. So those were our happiest years." - Jacqueline Kennedy 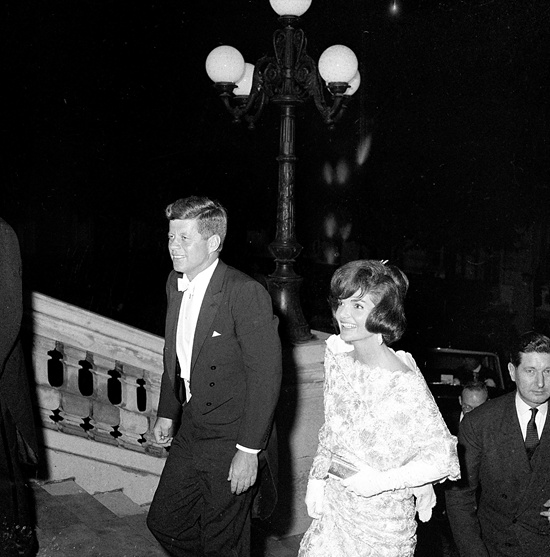 President and Mrs. Kennedy made their first transatlantic State visit in May-June, 1961. Six months after heralding a new generation of leadership in his inaugural address, President Kennedy met face-to-face with the leaders of France, the Soviet Union, and the United Kingdom, all of whom were more than twenty years his senior. While international headlines portrayed a young President wrestling with the Bay of Pigs debacle in Cuba and incidents of racial violence in the southern states, JFK conducted a form of personal diplomacy. The first stop was Paris. The President conferred with French President Charles de Gaulle for two days in a series of substantive meetings covering a range of international questions. But the great success of the trip came not in the private discussions of the leaders, but in the public appearances of the President and First Lady.

De Gaulle respected Jack... "I mean, I don't know what his opinion was, but obviously, everyone thought, who is this young President?" - Jacqueline Kennedy

A Shared Love of Words

"He read in the strangest way . . . He'd read walking, he'd read at the table, at meals, he'd read after dinner, he'd read in the bathtub . . . He really read all the times you don't think you have time to read. . . . He was always reading—practically while driving a car. " - Jacqueline Kennedy

Both President and Mrs. Kennedy shared a love of language, and believed in the power of words. As a young man, JFK collected quotes that he kept in notebooks—a habit passed down from his mother, and he was the first President to invite a poet, Robert Frost, to recite his work at an inaugural ceremony. Poems that Jacqueline Kennedy memorized as a child with her grandfather stayed with her throughout her life. She once wrote: "All the changes in the world, for good or evil, were first brought about by words."

In this campaign speech, then-Senator Kennedy quoted three U.S. Presidents, American writer Robert Sherwood, Shakespeare's King Lear, American historian Vernon Louis Parrington, U.S. Supreme Court Justice Oliver Wendell Holmes, and British statesman David Lloyd George. While waiting to deliver the speech, he decided to close with the last lines of Alfred Lord Tennyson's poem, "Ulysses," but could not quite remember the words. So he scribbled on the back of a page this note to his wife, who had memorized the poem as a child: "Give me last lines from Ulysses beginning, 'Come my friends.'" She wrote down the rest of the poem, missing just a few words. He recited the poem's final lines at the end of his prepared text.

Remarks of Senator John F. Kennedy, Yakima, Washington, first and last pages and the back of page 4, showing the exchange of notes between the Senator and his wife, June 21, 1959 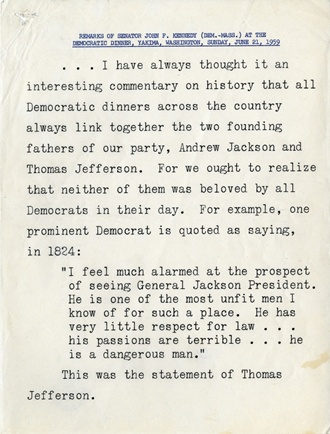 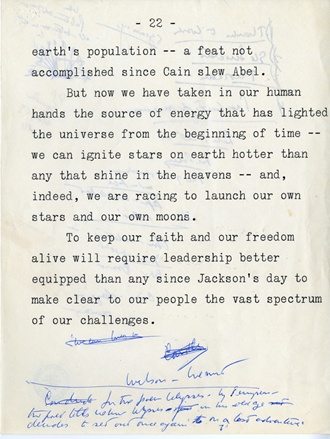 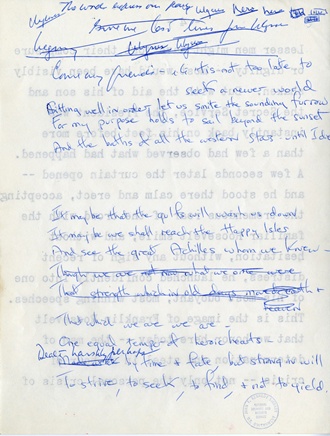 The youngest man ever elected President, JFK came to office in one of the closest elections in U.S. history. On Inauguration Day, he understood that he would have to project a commanding image to unite the country and instill confidence both at home and abroad. Shortly after noon on January 20, 1961, he delivered a fourteen-minute address that electrified his audience and remains a source of inspiration half a century later. Mrs. Kennedy remembered the moments after her husband left the inaugural platform. 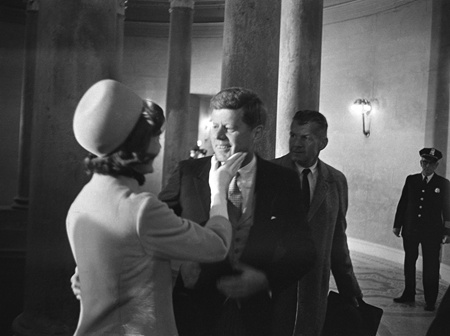 "Everyone said, why didn't Jack kiss you after, which of course, he would never do there. But you had to march out in such order that I was about eight behind him . . . And I so badly wanted to see him before the lunch, just to see him alone. . . . And I caught up to him in the Capitol and, oh, I was just so proud of him.

"And there's a picture where I have my hand on his chin and you know, he's just looking at me and there really were tears in his eyes. . . . suddenly a flash came because I didn't think there was anyone there. In the papers it said, wife chucks him under chin. I mean, that was so much more emotional than any kiss because his eyes really did fill with tears. " - Jacqueline Kennedy 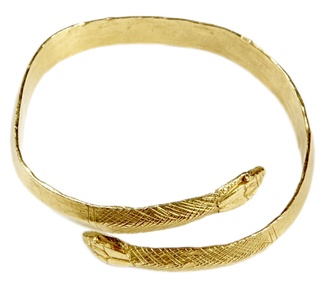 Mrs. Kennedy recalled that, on the occasion of their tenth wedding anniversary, her husband had offered her a selection of gifts from which to choose.

"And I could see the present that he wanted me to choose the most was this Alexandrian bracelet. It's terribly simple, gold, sort of a snake. And it was the simplest thing of all and I could see how he loved it. He'd just hold it in his hand. So, that was a special present and he wouldn't say which one he wanted to give me, but I could tell so I chose it." - Jacqueline Kennedy

Family Life at the White House 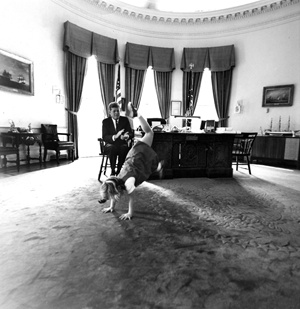 ". . . [I] always taught them that the White House was sort of temporary . . . that it was while Daddy was President . . . I'd tell them little stories about other Presidents and then there would be a President after Daddy . . . so they never got to think that all this was going to be forever . . . " - Jacqueline Kennedy

"He loved those children tumbling around him." - Jacqueline Kennedy

"He didn't like to read books to them much. He'd rather tell them stories. He'd make up these fantastic ones . . . you know, little things that had to do with their world . . ."- Jacqueline Kennedy 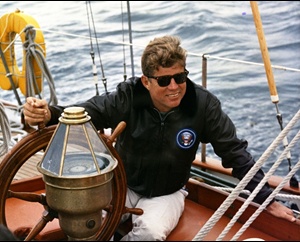 President Kennedy had a lifelong fascination with the sea and was an avid sailor. Mrs. Kennedy recalled how he could escape the cares of his office—and the telephone—while at sea.

"It was really the boat that relaxed him the most. . . . It was for what getting out on a horse was for me, in the air, no phone . . . He loved the sun and the water and no phone." - Jacqueline Kennedy

President Kennedy sailing off the coast of Rhode Island on the Coast Guard vessel, Manitou, August 26, 1962 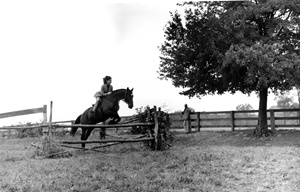 For Jacqueline Kennedy, it was riding that replenished her spirit. She learned to ride as a child and grew to be an accomplished equestrienne.

"He liked to see me ride— he always said Daddy told him 'Keep her riding and she'll always be in a good mood.' - Jacqueline Kennedy

Note from Jacqueline Kennedy to her press secretary, Pamela Turnure, responding to five questions submitted by a reporter who was preparing a story on the First Lady and Queen Elizabeth as "horsewomen:"

1. What was the name of Mrs. Kennedy's first horse and at what age did she get it?
2. Of all the horses she has owned and ridden, which was her favorite?
3. What does she feed her horses—carrots?
4. Has she ever been thrown from a horse?
5. Does she remember her horses' birthday in any special way? 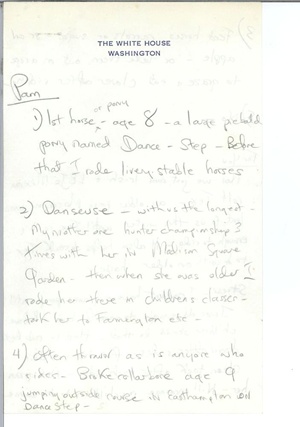 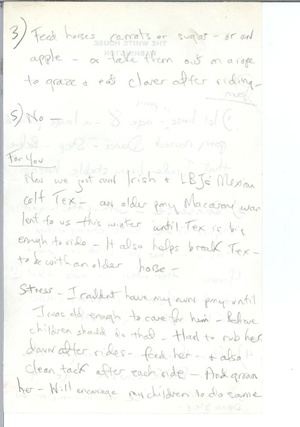