In the 1960 campaign, John F. Kennedy pledged "to get this country moving again," and offered voters a new generation of leadership.  He challenged his fellow citizens to join him in the struggle for freedom in the perilous years of the Cold War. On Inauguration Day, January 20, 1961, nearly one million people in the nation's capitol braved the subfreezing temperatures to catch a glimpse of the new President they had elected.  A snowstorm had left the city glittering in the winter's light. The hard issues of the day---the Communist threat, a nuclear arms race, racial unrest, and economic distress---awaited the President and the nation. But January 20th would be a day of celebration---all sunshine and possibility---when a bold, young leader took to the world stage and stood poised at the edge of a promise. 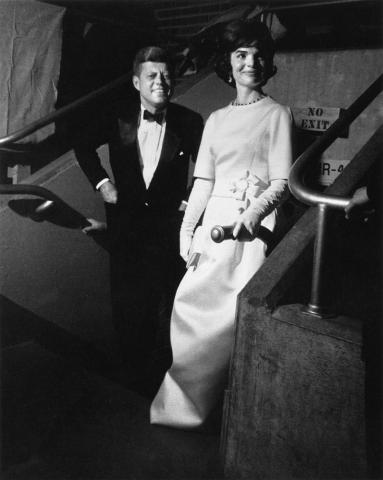 This exhibit includes the top hat and gloves the President-elect wore during that cold January day, the evening gown Jacqueline Kennedy wore to the gala, and a series of photographs -- never before seen or published -- showing the people who braved the subfreezing temperatures of January 20, 1961, to catch a glimpse of the new President and First Lady.