Rose Kennedy: In Her Own Words

I have always enjoyed living and working, and I believe I have had a great life, I consider myself very lucky. I had a wonderful youth; my father gave me the stimulation of travel [and] zest - curiosity and interest and enthusiasm for life. My mother bestowed on me Faith and common sense. I fell in love young and married the man I loved, and lived a full life with him – from finance to the movies to politics to diplomacy. I have been ideally happy with my children.” 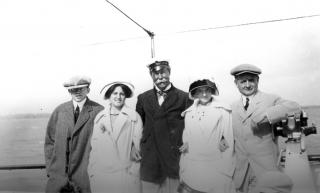 Daughter of Boston mayor John F. “Honey Fitz” Fitzgerald; wife of businessman and US Ambassador to Great Britain Joseph P. Kennedy; mother of nine children, including President John F. Kennedy and Senators Robert F. Kennedy and Edward M. Kennedy; author of the 1974 memoir, Times to Remember ; and advocate of research and education on mental retardation, Rose Kennedy led an unusually full and eventful life. She was born in Boston’s North End in 1890, she died at age 104 in her family home in Hyannis Port, Massachusetts, in 1995. 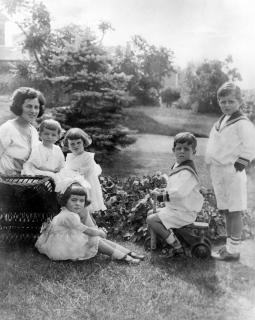 Rose Kennedy and her children, Boston, 1922.Rose Kennedy actively participated in the campaigns and public service careers of her husband and children, all the while remaining a prolific correspondent and keeping a diary, pages of which offer a glimpse into the history she lived.  She wrote about growing up in Boston and Concord, traveling, education, falling in love, marrying, her family, the years in England, highlights and tragedies of her life, her faith, raising children, shopping, grammar, spelling, manners and posture. She recorded her wedding and honeymoon in her 1914 “The Wedding Log,” her travels in journals like “My Ocean Trip,” her 1938 visit to “Windsor Castle” in scrapbooks, and quotations she liked in her “Little Black Book.” She wrote detailed letters to her parents from convent school in Europe, fond letters to her husband, round-robin letters to her 9 children updating them on where everyone was and what each was doing.   Boston Mayor John F. "Honey Fitz" Fitzgerald and daughter Rose review a parade, circa 1910.

Rose was exposed to the art of politics at a young age, which prepared her for a life as the wife and mother of public servants. She campaigned for three of her sons for political offices from Congressman to Senator to President. She gave as many as three speeches a day, some in French. In 1959, she was lobbying New York cab drivers who supported Adlai Stevenson to vote for Jack. She prayed all day for Jack’s success in his debate with Richard Nixon.

“People think that Jack speaks too fast. I agree and have already told him, because the audience has to become accustomed to his Boston accent.”

In a political speech drafted for John F. Kennedy's 1960 presidential campaign, Rose Fitzgerald Kennedy reminisces about growing up in Concord, Massachusetts in the late 1890’s: 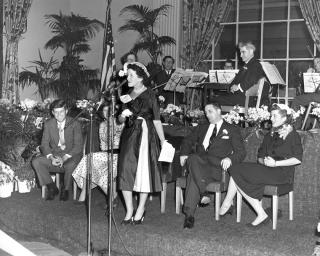 As a little girl I lived on a farm…outside of Boston . Those were the days when we slept in feather beds & read to the lights of kerosene lamps, and got our milk in a 5 gallon tin can. But I was happy and contented, helping my grandmother in the garden & riding home proudly with my grandfather on a load of hay after the men had piled it high…in the old farm wagon drawn by the farm horse. I heard about the hardships, too, in those days…when the rains did not fall & vegetables were parched…and the other gray days when there were too many peas and beans in the market at one time and the prices would fall and the apples would lie rotting on the ground because it was not worth while to pick them..."

Mining this rich collection, the Museum presents a selection of photographs, documents, journals and other memorabilia in this special exhibit.