The Museum at the John F. Kennedy Presidential Library marks the 60th anniversary of the end of World War II with a special exhibit on John F. Kennedy’s military service in the US Navy in the Solomon Islands in the South Pacific. 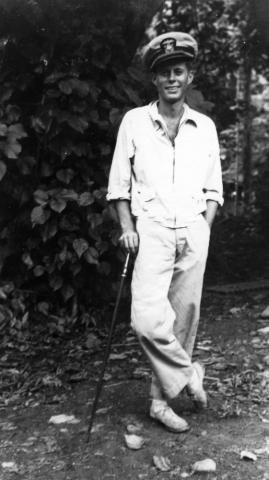 Many young Americans of all backgrounds volunteered for military service in 1941, including young John F. Kennedy. To commemorate the 60th anniversary year of the end of World War II, this special exhibit is a tribute to all the enlisted men, women and junior officers who, like Kennedy, went in harm’s way to serve their nation.

Commanding the Patrol Torpedo Craft (PT) USS PT 109, Lieutenant, Junior Grade, John Kennedy and his crew participated in the early campaigns in the Allies’ long struggle to roll back the Japanese from their conquests throughout the island chains of the Pacific Ocean. The role of the small but fast PT boats was to attack the Japanese shipping known as the "Tokyo Express" that supplied Japanese troops in the islands, and to support the US Army and Marine Corps attacking the Japanese on shore.

On August 2, 1943, as PT 109 was running silent to avoid detection it was struck by the Japanese destroyer Amagiri. Traveling at 40 knots, the destroyer cut PT 109 in two. The entire crew was thrown into the dark waters. Kennedy towed injured crew member McMahon 4 miles to a small island to the southeast. All eleven survivors made it to the island after having spent a total of fifteen hours in the water. After four days on the island, with the help of a message on a coconut carried by local islanders to an Australian spying on the Japanese they were finally rescued on August 8th.

The exhibit reflects a formative period of JFK's life, an experience he shared with so many other young men of his generation, and an experience that shaped their characters and the character of our nation for much of the remainder of the 20th century.