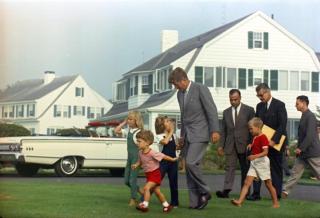 No wonder it is remembered as a magical place. On a Friday evening, the helicopter carrying the President of the United States would approach the shores of Nantucket Sound and alight on the lawn of the sprawling Kennedy home in Hyannis Port that had been the emotional center of the family's life for decades.

A rush of suntanned children — JFK's own daughter and son, and a flock of nieces and nephews — swarmed the President as he arrived for a few days of relaxation and family time.

And though he remained at the center of a network that was poised to respond to any national threat or crisis, it was here, in the salty breeze of the New England coast, that he found renewal and inspiration.

"Alive with Children and Good Times"

The Kennedy home on Cape Cod was "alive with children and good times," the President's youngest brother later recalled. "He arrived here and had an entirely different kind of mood."

Throughout his life, the sights and sounds of the Cape sustained President Kennedy. At the White House, he surrounded himself with pictures and things that transported him back to the place he loved best.

Presented in this exhibit is a selection of original artifacts, photographs, and historic film footage to provide a glimpse of the private family man and to evoke the carefree abandon of a summer afternoon.

Highlights from the exhibit are never-before-displayed artifacts from the Kennedy family's summers on Cape Cod, including President Kennedy's Golf Cart, his golf club and a set of personalized golf balls.

This toy schooner, a gift to John Jr., was presented to President Kennedy on June 2, 1963 during his state visit to Italy by President Antonio Segni.

Jacqueline Kennedy commissioned a Cape Cod woodcarver to create these shorebirds as a gift for her husband. President Kennedy displayed them in the Oval Office.

The sailboat weather vane was also a gift from the First Lady to the President on the occasion of his 46th birthday. It was intended for their Cape Cod home.