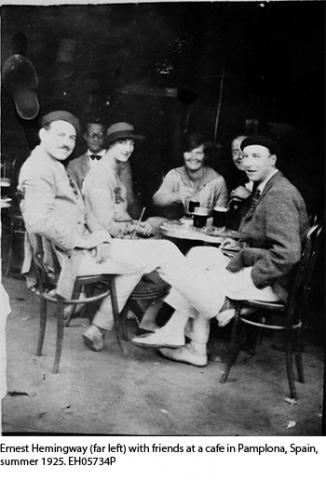 The John F. Kennedy Presidential Library and Museum is proud to present a new landmark exhibition, Ernest Hemingway: Between Two Wars. Showcasing the JFK Library’s Hemingway Collection, this is the first ever major museum exhibition devoted to the work and life of Ernest Hemingway. The exhibit features a trove of rarely exhibited material, including multiple drafts of the writer’s major works, correspondence with a legendary circle of expatriate writers living in 1920s Paris, as well as photographs and a selection of Hemingway’s personal belongings. Created in partnership with the Morgan Library & Museum, the exhibition humanizes a man who was larger than life and documents the consummate craftsmanship and discipline at the heart of Hemingway’s literary genius.

Critically acclaimed during its three-month run at the Morgan Library & Museum in New York, Ernest Hemingway: Between Two Wars will be presented at the JFK Library through the end of the year.

“The Ernest Hemingway Collection is one of the Kennedy Library’s great treasures,” said Stacey Bredhoff, JFK Library Museum Curator. “The original materials displayed in this exhibition reveal the fearless and relentless pursuit of the truth that drove Hemingway as a writer. Setting out to bring an actual life experience to the reader, Hemingway originated a style of writing that transformed American literature in the 20th century, and continues to inspire generations of writers around the world. The Kennedy Library has collaborated with the Morgan Library in creating this exhibition; following a successful run in New York, we are thrilled to bring it home and present it to our Boston audience.”