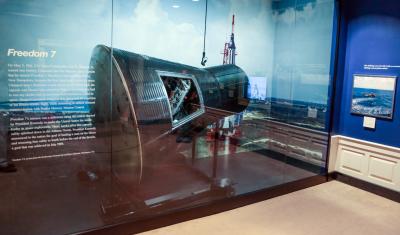 “We choose to go to the moon in this decade and do the other things, not because they are easy, but because they are hard, because that goal will serve to organize and measure the best of our energies and skills, because that challenge is one that we are willing to accept, one we are unwilling to postpone, and one which we intend to win.” - President John F. Kennedy, September 12, 1962

Crammed into this Mercury Space Capsule that he named Freedom 7, Shepard, a native of East Derry, New Hampshire, became the first American to travel in space. Clamped atop a Redstone rocket nearly 7 stories high, the capsule was blasted into sub-orbital flight that laid to rest any doubts that man could function in space—at least for a short period. In a mission that lasted just over 15 minutes, Alan Shepard managed and monitored 27 events and communicated with Mercury Control 78 times.

Freedom 7’s mission was a milestone along the course charted by President Kennedy to make the United States number one in the world in space exploration. Three weeks after this capsule safely splashed down in the Atlantic Ocean, President Kennedy announced to the nation the goal of landing a man on the moon and returning him safely to earth before the end of the decade, a goal that was achieved in July 1969. The Freedom 7 space capsule on display in this exhibit is on loan from the Smithsonian National Air and Space Museum, Washington, DC.