Presents to a President and First Lady 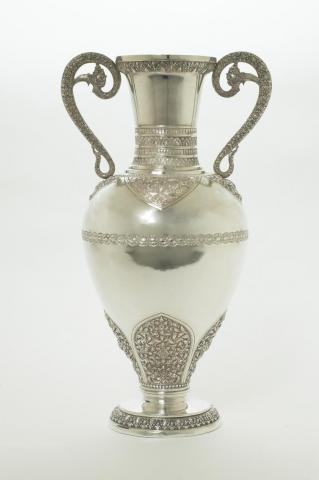 The exchange of gifts among heads of state is a centuries-old tradition, and remains a part of the culture of modern-day international relations. President and Mrs. Kennedy delighted in the gifts presented to them by representatives of countries around the globe, particularly items which showcased the fine work of a foreign country’s craftsmen. In both the Oval Office and the White House residence, the president and first lady would display such gifts for visitors and family members to enjoy.

An 18"-tall silver amphora vase with caryatid handles, detailed with dragon-heads in repousse and finely chased lines, and a 19"-tall silver tureen with detailed design on a dramatic pedestal base were presented to First Lady Jacqueline Kennedy by Norodom Sihanouk, King of Cambodia.

A mother-of-pearl nativity scene framed in a brilliant, over-sized, pearl-inlay star, given to Caroline Kennedy for her birthday by His Majesty King Hussein bin Talal of Jordan.

A Kuba tribal mask depicting "Ngaady a Mwaash," a royal female ancestor of the 17th century Bushoong Kuba dynasty, presented to President Kennedy by Fwamba Mukengele, the Deputy to the National Assembly of the Republic of Congo, on August 2.

A silver humidor, a gift from Soviet Premier Khrushchev to President Kennedy during their first meeting on June 4, 1961, in Vienna, Austria.

An Afghan head of Buddha, dating to the 2nd century, presented to President Kennedy by Afghan King Mohammed Zahir at the White House on September 5, 1963.

A 10th century ceramic bowl, 8 ½" in diameter, in off-white glaze decorated with bird and scroll design, presented to the President by the Shah of Iran, Mohammad Reza Pahlavi, on April 11, 1962.

Matching gold and jeweled bracelet and belt presented to Mrs. Kennedy by Hassan II, the King of Morocco, during his March 27, 1963, state visit to the White House.

Silver slippers with red-velvet lining adorned with brass crescent and star presented by Hasan al-Rida al Sanusi, Crown Prince of the United Kingdom of Libya, during his state visit to the White House on October 16, 1962.

A 14" circular platter with concentric repousse bands of elephants, horses, lions, bulls, and the Sacred Goose, "hamsa," around two bands of lotus petals presented to the President by the nephew of Sirimavo Bandaranaike, the Prime Minister of Ceylon (Sri Lanka), during his visit to the White House on October 4, 1961.

An ivory model of an ancient Egyptian barge with a serpent motif and a Damascened vase with bands of Arabic inscriptions, medallions, and ornamental work done in repousse with fine chasing given to President Kennedy by Gamal Abdel-Nasser, President of Egypt.

Cocoa Plantation , a painting of two people working among cocoa trees by Diaby Youssouf presented to President Kennedy by Felix Houphouet-Boigny, the President of the Republic of Cote d’Ivoire, on May 22, 1962.