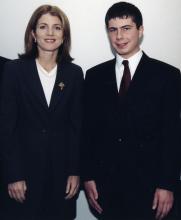 In this new century, there are a daunting number of important issues which are to be confronted if we are to progress as a nation. Each must be addressed thoroughly and energetically. But in order to accomplish the collective goals of our society, we must first address how we deal with issues. We must re-examine the psychological and political climate of American politics. As it stands, our future is at risk due to a troubling tendency towards cynicism among voters and elected officials. The successful resolution of every issue before us depends on the fundamental question of public integrity.

A new attitude has swept American politics. Candidates have discovered that is easier to be elected by not offending anyone rather than by impressing the voters. Politicians are rushing for the center, careful not to stick their necks out on issues. Most Democrats shy away from the word “liberal” like a horrid accusation. Republican presidential hopeful George W. Bush uses the centrist rhetoric of “compassionate conservatism” while Pat Buchanan, once considered a mainstream Republican, has been driven off the ideological edge of the G.O.P. Just as film producers shoot different endings and let test audiences select the most pleasing, some candidates run “test platforms” through sample groups to see which is most likely to win before they speak out on major issue. This disturbing trend reveals cynicism, a double-sided problem, which is perhaps, the greatest threat to the continued success of the American political system.

Cynical candidates have developed an ability to outgrow their convictions in order to win power. Cynical citizens have given up on the election process, going to the polls at one of the lowest rates in the democratic world. Such an atmosphere inevitably distances our society from its leadership and is thus a fundamental threat to the principles of democracy. It also calls into question what motivates a run for office – in many cases, apparently, only the desire to occupy it. Fortunately for the political process, there remain a number of committed individuals who are steadfast enough in their beliefs to run for office to benefit their fellow Americans. Such people are willing to eschew political and personal comfort and convenience because they believe they can make a difference. One outstanding and inspiring example of such integrity is the country’s only Independent Congressman, Vermont’s Bernie Sanders.

Sanders’ courage is evident in the first word he uses to describe himself: “Socialist”. In a country where Communism is still the dirtiest of ideological dirty words, in a climate where even liberalism is considered radical, and Socialism is immediately and perhaps willfully confused with Communism, a politician dares to call himself a socialist? He does indeed. Here is someone who has “looked into his own soul” and expressed an ideology, the endorsement of which, in today’s political atmosphere, is analogous to a self-inflicted gunshot wound.  Even though he has lived through a time in which an admitted socialist could not act in a film, let alone hold a Congressional seat, Sanders is not afraid to be candid about his political persuasion.

After numerous political defeats in his traditionally Republican state, Sanders won the office of mayor of Burlington by ten votes. A successful and popular mayor, he went on to win Vermont’s one Congressional seat in 1990. Since then, he has taken many courageous and politically risky stands on issues facing the nation.  He has come under fire from various conservative religious groups because of his support for same-sex marriages.  His stance on gun control led to NRA-organized media campaigns against him. Sanders has also shown creativity in organizing drug-shopping trips to Canada for senior citizens to call attention to inflated drug prices in the United States.

While impressive, Sanders’ candor does not itself represent political courage. The nation is teeming with outspoken radicals in one form or another.  Most are sooner called crazy than courageous. It is the second half of Sanders’ political role that puts the first half into perspective: he is a powerful force for conciliation and bi-partisanship on Capitol Hill. In Profiles in Courage, John F. Kennedy wrote that “we should not be too hasty in condemning all compromise as bad morals. For politics and legislation are not matters for inflexible principles or unattainable ideals.” It may seem strange that someone so steadfast in his principles has a reputation as a peacemaker between divided forces in Washington, but this is what makes Sanders truly remarkable. He represents President Kennedy’s ideal of “compromises of issues, not of principles.”

Sanders has used his unique position as the lone Independent Congressman to help Democrats and Republicans force hearings on the internal structure of the International Monetary Fund, which he sees as excessively powerful and unaccountable. He also succeeded in quietly persuading reluctant Republicans and President Clinton to ban the import of products made by under-age workers. Sanders drew some criticism from the far left when he chose to grudgingly endorse President Clinton’s bids for election and re-election as President. Sanders explained that while he disagreed with many of Clinton’s centrist policies, he felt that he was the best option for America’s working class.

Sanders’ positions on many difficult issues are commendable, but his real impact has been as a reaction to the cynical climate which threatens the effectiveness of the democratic system. His energy, candor, conviction, and ability to bring people together stand against the current of opportunism, moral compromise, and partisanship which runs rampant on the American political scene. He and few others like him have the power to restore principle and leadership in Congress and to win back the faith of a voting public weary and wary of political opportunism. Above all, I commend Bernie Sanders for giving me an answer to those who say American young people see politics as a cesspool of corruption, beyond redemption. I have heard that no sensible young person today would want to give his or her life to public service. I can personally assure you this is untrue.

Nichols, John.  “Go Knock on Some Doors: Bernie Sanders Sounds Off.” The Progressive. May 1996.