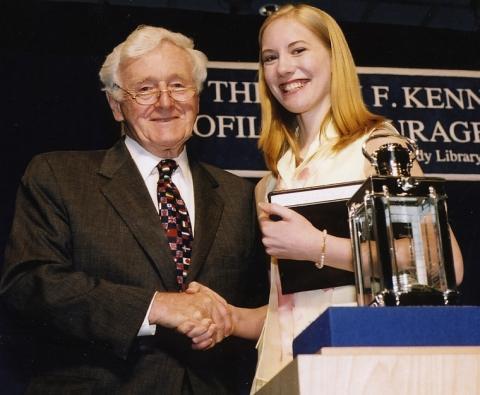 Americans have rewritten the Declaration of Independence a thousand times since it was signed in 1776. The concepts that “all men are created equal” and that we are endowed with rights to “life, liberty, and the pursuit of happiness” are inaccurate according to Thomas Jefferson, the author of these words. Their purpose was to prompt Americans to constantly reexamine our liberties and to promote these ideals until they equal truth (Boyer et al. 158).

As America has developed, we have awarded women suffrage, presented African Americans with equal opportunities and granted homosexuals the right to join in civil unions.  With each transformation, we rewrite a truth that more closely resembles our ideals. The daring few who advocate justice to an unenlightened majority are the heroes and progressive sculptors of our living Declaration.

In 1967, a group of these bold Americans congregated outside Independence Hall in Philadelphia to crusade for the idyllic liberties of which Thomas Jefferson wrote. In an era where most gays tried to hide their “sinful and sick” identities in miserable heterosexual marriages (Galas 18), a black and white placard was held high: “Fifteen million U.S. homosexuals ask for the right to the pursuit of happiness” (Galas 16).  Since 1967, gays have endured failed lawsuits and unfavorable legislation in their campaign for gay marriage. But in 2000, Vermont’s Governor Howard Dean signed a landmark bill finally awarding homosexuals the freedom they had been fighting for.

An unlikely gay rights advocate, Dean seemed politically infallible. The Yale graduate assumed the Governor’s position in 1991 and over 9 years developed every politician’s ideal resume. Dean made Vermont the forerunner in welfare and health care reform and made it first, nationally, in childhood immunizations. Dean also eliminated his state’s sixty-four million dollar deficit and still managed to cut taxes. No one was surprised that Dean won reelections easily with seventy percent of the vote (State of Vermont). With his performance and popularity as governor, he could have run for President. Why did Howard Dean risk his political future with the signing of one bill?

On April 26, 2000, H.0847, known as the civil unions bill was signed into law. Vermont became the first state to allow gay couples to enter into civil unions, the marriage substitute for homosexual couples. Finally, they too had won the right to pursue happiness. Through civil unions, gays now have access to hundreds of benefits, from spousal inheritance rights to tax advantages to society’s recognition that they, too, can commit to loving relationships. The Washington Post declared that the bill “significantly raises the standard for gay civil rights nationwide” (Ferdinand). The Advocate praised Vermont as “the most forward-thinking state in the nation.” (Dean).

Vermonters will proudly tell you that they have always had a “live-and-let-live” state of mind but the prospect of letting homosexuals enter into civil unions sparked intense political controversy.  At the time of the bill’s signing, the majority of Vermont voters were against it (Vermont Governor Signs...). A backlash campaign called “Take Back Vermont” publicized its slogan on barns, billboards, cars and t-shirts. They vowed that come Election Day, Dean and legislators who had supported the bill, would be voted out of office (Goldberg). Officials received hate mail and had their cars vandalized (Ferdinand) while political graffiti littered Vermont roadsides (Goldberg).

Ruth Dwyer, an opposition candidate for governor in 2000, charged Dean’s administration with being “arrogant and disrespectful” for ignoring the state’s majority (Schmaler) while Vermont House Representative Neil Randall accused the state of committing a “social rape upon an unwilling citizenry” (Ferdinand). At the start of a tumultuous election season, Dean’s courage to maintain his loyalty to principle over popularity at the possible expense of his career would be tested.

In his campaign for reelection to a fifth gubernatorial term, an ambitious Dean would have focused on health care, taxes, or any of a number of “safe” political platforms.  However, disturbed by Vermont’s reaction toward gay civil unions, Dean made the “extension of the rights and benefits of the [Vermont] constitution to all Vermonters, regardless of their sexual orientation” (Dean) the heart of his campaign for acceptance and understanding. Over the next six months, Dean fought harder for open-mindedness than for votes. He spoke against the “Take Back Vermont” movement, his most serious Election Day threat, stating that he never wanted to take Vermont back to “a time when it was okay to discriminate against people” (Goldberg). Dean effectively avoided the homophobic trends in political campaigning, but burdened himself with the political plague in popularity polls.

In an interview with The Advocate, Dean maintained that despite damage to his campaign, he had no regrets about supporting Vermont’s civil unions bill: “This...is about principle, and that principle is respect for everyone—and that is regardless of gender, ethnicity, sexual orientation, race, or any one of a number of factors that makes us different” (Dean). Minority champions like Dean, with the courage to hold principle and respect for all people above common opinion, are the reasons that today women can vote, African Americans are legally protected from discrimination, and homosexuals can engage in civil unions.

President John F. Kennedy recognized the importance of these courageous people to the success of our nation when he stated, “A democracy that has... no monument of individual conscience in a sea of popular rule is not worthy to bear the name” (Kennedy 161). The outstanding courage exemplified by Howard Dean legitimizes the ideals of our Declaration of Independence in today’s America.

On Election Day 2000, Vermonters voted their verdict on Dean’s integrity: he was reelected.  Despite dissension, voters valued Dean for his commitment to principle. The ultimate success of Vermont’s civil unions bill and Dean’s reelection could serve as a persuasive impetus to grant gays similar freedoms in other states. The effect of Dean’s courage, however, reaches beyond the law. For a generation of young Americans, Dean proved that justice is possible and that rights to “life, liberty, and the pursuit of happiness,” are still worth defending.