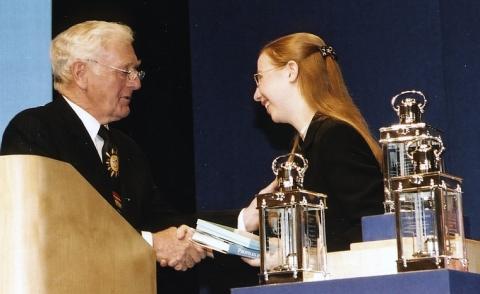 By Emily Ullman
Academy for the Advancement of Science and Technology
Hackensack, New Jersey

Before the landmark U.S. Supreme Court case Roe v. Wade, each state was permitted to enact its own legislation with regard to abortion. The criminalization of abortion had spread from England to America in the first half of the nineteenth century. By 1900, almost all state legislatures had laws outlawing any attempt at ending a pregnancy except for a threat to the mother’s life, and even disseminating information about abortion or birth control was a criminal offense. The pro-birth control movement, and with it a fledgling abortion rights movement, sprang up almost immediately. By 1970, critical test cases were being pushed through the courts across the country.  In New York, the combined impetus of a lawsuit, Abramowicz v. Lefkowitz, brought by three hundred women, and the determined efforts of Assemblywoman Constance Cook forced a bill to repeal the anti-abortion laws to the floor of the State Legislature. There it would be the subject of one of the most bitter debates in the history of that body.

The repeal bill provided for legal, on-demand abortions during the first 24 weeks of pregnancy. It had already been passed by the state Senate after five grueling hours of debate, 31 to 26. In the three weeks separating the two votes, the pressure on the assemblymen was intense. The Catholic Church, in particular, had mobilized its clergy to persuade religious legislators to vote against the bill. Constance Cook, the bill’s sponsor, determined that 75 votes would be the number necessary to pass the measure.

With a full gallery, the Assembly met on April 9th to determine the fate of the New York abortion law. At 4:30, the final roll call was taken.  As the clerk tallied the votes, it became clear that a count of 74 to 74 had left the repeal movement one vote short.  Before the bill could be officially announced as defeated, however, George Michaels, an assemblyman from upstate Cayuga County who had originally voted “No,” rose to his feet.  Shaking, he spoke to the legislature about his family’s support of the bill and the pain he had felt for voting against it previously.  Finally, as the chamber sat in hushed silence, he said “What’s the use of getting elected if you don’t stand for something. I realize, Mr. Speaker, that I am terminating my political career, but I cannot in good conscience sit here and allow my vote to be the one that defeats this bill – I ask that my vote be changed from ‘No’ to ‘Yes’” (Saxon) As the floor erupted, Michaels put his head down on his desk and cried.

George Michaels was a native of College Point, Queens, and attended Cornell University and Brooklyn Law School. A decorated captain in World War II, he was a partner in an Auburn, NY law firm. In 1970, he was 59 years old and a fifth term state assemblyman. He was a Democrat from a largely conservative and Republican district but was elected on the votes of his Catholic constituency, a group comprising about 65% of the city of Auburn. Michaels had compiled a highly conservative voting record and had several times previously voted against any change in the legal status of abortion. However, his personal convictions were with the prorepeal camp. One of his sons, a rabbinic intern in a Cincinnati ghetto, had told his father about the poor women he had seen mangled by back-alley abortions, a problem that affected Michaels deeply. Hoping to satisfy his conscience as well as keep his seat, he promised his family and Constance Cook that he would vote to repeal if his was the deciding ballot.  When confronted with the reality of the situation he had most hoped to avoid, Michaels gathered up his courage and stood by his convictions.

The voters of Cayuga County were appalled at what they felt was a betrayal of their wishes. Threats and vicious letters required the Auburn Police Department to post guards outside Michaels’ home, and his law firm broke up when his partner refused to be associated with him. Two priests in Auburn organized a campaign against Michaels branding him a murderer and traitor to his party, and bending to the overwhelming adverse sentiment, the Cayuga County Democratic Party denied him what otherwise would have been a routine renomination three months later. Doggedly competing in a four-way primary without organizational support or money, Michaels went on speaking tours and attempted to explain his choice to his constituency. On one of these trips, he ran his car into a bridge and was hospitalized with a shattered leg and seven broken ribs. Unable to complete his campaign, he was defeated in the primary. Nevertheless, he ran on the Liberal party line in the general election, but was again defeated.

Michaels’ prediction on that fateful day of April 9, 1970 proved true; his vote cost him the election and he never again ran for office. Instead, he faded into obscurity, practicing law in Auburn with his son Lee until his retirement and his death from liver cancer at 80 in 1992. Still, his political courage changed the entire landscape of the abortion debate. Women from around the country flocked to New York to have legal, safe abortions.  Heartened, activists pressed their cases in other states, including the Texas and Georgia lawsuits that eventually would become Roe v. Wade and Doe v. Bolton. Still more importantly, George Michaels proved that even a part-time state assemblyman can make a difference. His strength is an inspiring example in the battle for personal freedom that still rages today, a battle that cannot be fought without brave individuals willing to sacrifice for their principles. Michaels gave hope to a generation of women, and struck a blow for liberty that should be as honored today as it was by the founders and great men of our nation.