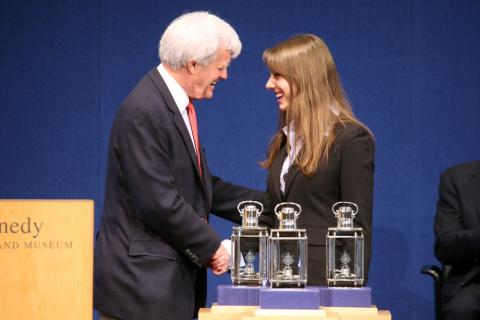 On December 11, 2007, members of the United States Sentencing Commission voted unanimously to make a groundbreaking change in one of their policies. They decided that the disparity between sentences for crack cocaine crimes and those involving powder cocaine was exceedingly unjust and prejudiced. With crack users being predominantly black and powder cocaine users predominantly white, the Sentencing Commission judged the much harsher sentences for crack users to be racially biased at their core (Grow, 2007). The Commission will therefore allow the sentences of thousands currently imprisoned for crack cocaine violations to be appealed before federal judges beginning in March 2008, in an effort to retroactively shorten these sentences where feasible (U.S. Sentencing Commission, 2007). While this represents a major innovative step toward racial equality and justice, one uncelebrated, independent woman put her entire career on the line for this very same issue--seventeen years ago.

Judge Pamela Alexander, currently serving as judge for the Hennepin County District Court in Minnesota, has repeatedly blazed trails into uncharted territory to achieve her goals. Born in 1952, Alexander grew up in an African-American family in Minneapolis. Her father, a bus driver, and her mother, a housewife, raised six children, with Pamela being the youngest. From a young age, Alexander glowed with a fiery ambition, and decided at age 12, after testifying at a rape trial, that she wanted to direct this ambition toward a law career. Her determination led her to become the first in her family to attend college. Upon graduating from Augsburg College in 1974, she continued to follow her dream of becoming a lawyer who truly cared about her clients, and ultimately received her J.D. in 1977 from the University of Minnesota Law School. Alexander embraced her new profession with a passionate competence that captured the attention of her peers. Watching her capably defend her mostly poor and indigent clients, fellow Legal Rights Court attorney Michael Davis (1993) remarked that he “saw, first hand, her dedication in ensuring each client received the highest quality legal representation” (para. 3). In 1981, Pamela Alexander became the first African-American female prosecutor in the Hennepin County Attorney’s Office, and then set yet another precedent by becoming the first African-American woman and the youngest attorney to serve as a judge in Hennepin County (Davis, 1993).

Judge Alexander had the world at her fingertips, with seemingly limitless opportunities in her future. That is, until 1990, when the newly elected judge, unwavering in her determination to dispense justice in accordance with the constitutions of her state and her country, made a monumental and controversial ruling. In the case State v Russell, five African-American defendants, including Gerald Russell, stood before Judge Alexander, each threatened with a 20-year prison term. The State had charged the men with possessing three or more grams of crack cocaine. While having up to ten grams of powder cocaine would result in a five-year sentence at most, the possession of three or more grams of crack cocaine could, by Minnesota law, lead to a sentence of 20 years (Alexander and Gyamerah, 1997, p. 97). Judge Alexander agreed with the defense argument that this statute was racially biased, since 92.3 percent of people charged with possessing crack cocaine were black and 85.1 percent of people charged with powder cocaine possession were white (Levine and Reinarman, 1997, p. 240). Knowing her decision could be injurious to her career, Alexander ruled that the sentencing law represented a blatant violation of constitutionally guaranteed equal rights protection and dismissed the charges. She stated:

There has been a recent outcry in this country for control of drugs. This concern has led to a rash of new laws with tough penalties designed [to] aid in this ‘war.’ While the concern of the nation is justified, the reactionary impulses that have come from the legislatures, in this case the Minnesota legislature, do not necessarily get to the root of the problem.

These actions must be kept in perspective and shouldn’t be instituted at the expense of basic civil rights…There is no justifiable reason to uphold a statute which results in such unequal treatment of similarly situated individuals. The [C]onstitution is designed to prevent this type of injustice” (qtd in Davis, 1993, para. 5).

In rendering her opinion, Judge Alexander refused to be swayed by the impassioned national antidrug movement of the late 1980s (Levine and Reinarman, 1997, p. 1), but instead rightfully based her decision on constitutional law.

The following year, the Minnesota Supreme Court upheld Judge Alexander’s decision, ruling that the sentencing statute was unconstitutional under Article 1, Section 2 and 16 of the Minnesota Constitution that provides citizens with the inherent right to “equal and impartial laws which govern the whole community and each member thereof” (State v Russell, 1999). However, Pamela Alexander’s ruling did not gain favor nationwide, as the country was immersed in its antidrug war. In fact, the Minnesota Court chose to equalize the cocaine sentencing disparities by increasing the terms of powder cocaine defendants (Appendix C, 2007).

It took an act of bravery for Alexander to rule in a way that sympathized with crack users during this era of American history, and she certainly paid the price. In 1993, Senator Paul Wellstone nominated Judge Alexander to be a U.S. district court judge under the Clinton administration. For two long years, Alexander traveled back and forth between Minnesota and D.C., where she was interviewed by various people, including agents of the F.B.I. Of this trying experience, Alexander said that, for those two years, “she dangled in the wind” (Grow, 2007). Despite Wellstone’s unfaltering support, the Clinton administration did not want to accept an “activist” judge who some saw as soft on crime (Grow, 2007). Standing firm in her belief in equal constitutional protection for comparable drug offenders in an era of antidrug fervor, “willing to sacrifice honors, prestige, and [her] chosen career on a single issue” (Kennedy, 1956, p. 7), Judge Alexander never became a federal judge. Despite the hardships she faced from her ruling in State v. Russell, Alexander never regretted the courageous decision that greatly stunted her promising career. Now, seventeen years later, as she sees her efforts finally making a difference, she can proudly say, “It’s about time” (Grow, 2007).

“A Law Distinguishing Crack From Other Cocaine Is Upset.” The New York Times

Alexander, Rudolf, Jr. and Jacquelyn Gyamerah. “Differential Punishing of African Americans and Whites Who Possess Drugs: A Just Policy or a Continuation of the Past?” Journal of Black Studies 28: September 1997, 97-111.