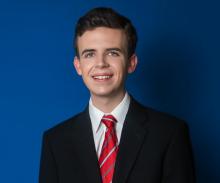 Representative Walter B. Jones Jr.:
“One of a Kind”

On an unusually warm Saturday in April 2003 at Camp Lejeune in Jacksonville, North Carolina, Republican U.S. Representative Walter B. Jones Jr., gazed at the funeral taking place under “Carolina blue skies” (Sisk). Marine Staff Sergeant Michael Bitz had died near Nasiriyah, Iraq, on March 23rd, days into the Iraqi invasion. Jones concentrated as Janina Bitz read aloud the last letter from her husband. Tearfully eyeing the fallen Marine’s young children, Jones watched two-year-old Joshua drop his rubber duck, which was swiftly retrieved and delicately returned to his small hands by a Marine in dress uniform (Sisk). As Joshua looked up at that Marine, Jones gravely thought, “This little boy would never know his daddy” (qtd. in Seelye). As John F. Kennedy said in Profiles in Courage, “A man does what he must -- in spite of… consequences… obstacles… and pressures -- and that is the basis of all human morality” (Kennedy 225). Because the funeral was a “spiritual happening” that would forever change his view on the Iraq War, Jones would do what he must (Dreyfuss).

Born the son of veteran Democratic Congressman Walter B. Jones Sr. in Farmville, an eastern North Carolina hamlet that was home for most of his life, Jones served ten years in the state legislature before evolving party platforms propelled him to become Republican in the 1990s (Mataconis; Graham). In 1994, he won a House seat representing the state’s 3rd District, a district adjacent to that of his late father. A “reliable Republican vote" in Congress, Jones accepted the premise by President George W. Bush’s administration that Iraq possessed weapons of mass destruction, and predictably voted for the Iraqi invasion in October 2002 (Sonmez). So fervent was his support, Jones was credited with renaming french fries in House cafeterias “freedom fries,” rebuking France’s opposition to the war (Ross and Sonmez).

Bitz’s funeral, however, made Jones reevaluate his war vote. His daughter Ashley knew her father was seeking answers, so at Christmas 2003, gave him an audiobook of James Bamford’s A Pretext for War, which he played on weekly drives home (Sisk). Bamford’s book highlighted flawed intelligence the Bush administration used to justify the war, and Jones, alarmed, invited the author to meet with Congressional colleagues in Washington (Yeoman; Dreyfuss). Mortified that the administration misled the American public and himself to justify war, Jones later said, “My heart aches, quite frankly” (Jones, Interview, 00:01:00 - 00:01:23).

Jones's outrage became public, declaring his opposition to the war at an April 2005 Armed Services Committee meeting. Emotionally recounting Bitz’s funeral, Jones angrily demanded the administration apologize to the country, saying, “It is just amazing to me how we… were told we had to remove this man [Saddam Hussein], but the reason we were given was not accurate” (qtd. in Funk). At a June press conference alongside several prominent Democrats, Jones introduced Homeward Bound, a pioneer resolution that mandated the administration strategize an Iraq exit (Kriner 149; U.S., Cong., House). While it was unsuccessful, Jones’s surprising reversal “sent shock waves throughout the political arena,” and he recruited others to the cause, saying, “All we’re trying to do is to start a debate about… [ending] the war” (Kriner 149; qtd. in Dreyfuss). Once an ardent supporter of the Iraq War, Jones became one of its most vocal critics, forever advocating for truth, accountability, increased discourse, and safety of American troops (Sisk).

Kennedy wrote that although it is courageous to defy one’s president, party, or nation, “[T]hese do not compare… to the courage required of… defying the angry power of the… constituents who control his future” (Kennedy 222). Jones's district included one of the nation’s largest Marine Corps bases, Camp Lejeune, and Marine Corps Air Station Cherry Point, “economic engines” upon which many depended (Kraushaar). Further, President Bush received 68 percent of the vote there in 2004, so Jones's renouncing the war was risky (Kraushaar). District pushback was swift, with furious troops, angry phone calls and letters, and rebukes from local party leaders (Kraushaar; Sisk). In 2008, Jones faced his first primary challenge ever and faced more every election thereafter, including twice against a former Bush aide with heavy Washington financial backing (Sisk; Graham). Jones always prevailed, though, holding true to convictions: “If doing what’s right means I don’t return to Congress, then it’s God’s will” (qtd. in Funk).

Kennedy described courageous politicians as those who place “their convictions ahead of their careers,” and Jones certainly sacrificed power by criticizing the war (Kennedy 206). Although in line to be the ranking Republican on the Armed Services Subcommittee on Readiness, he was passed over, concluding that “by doing what you think is right… there’s a price to pay” (qtd. in Fuller). In 2012, after numerous votes against the Republican agenda, Jones was stripped from the Financial Services Panel (Hamby). Jones remained a backbencher, yet committed to principle regardless, saying, “I didn’t come up here to seek power or to get a chairmanship” (qtd. in Dreyfuss).

Bitz’s funeral not only prompted Jones's political reversal on the Iraq War, but also began a personal atonement for his “pain of not voting my conscience” (Jones, “Representative,” 00:30:24 - 00:30:43). Using the same black fountain pen, he signed over 12,000 sympathy letters to families of troops killed in Iraq and Afghanistan, professing, “That’s my apology every time I sign one” (Sisk; qtd. in Yeoman). Jones also displayed portraits along his office corridor of nearly 580 Camp Lejeune Marines killed in combat (Waggoner).

Ultimately, Jones called renouncing the Iraq War “the genesis of the most important journey I’ve ever undertaken” (qtd. in Seelye). His renewed conviction to think independently to do what was right fueled later politically courageous acts, including voting against Republican initiatives like the repeal of the Affordable Care Act, the 2017 Republican tax cut, the Path to Prosperity, and banking deregulations (Graham; Marcos and Wasson). While such actions risked friendships, Jones genuinely charmed both sides of the aisle with his Southern drawl, integrity, and kindness (Ross and Sonmez). In today’s divisive politics, such civility seems sorely missing. When Jones died on his 76th birthday in February 2019, he was widely praised for the courage of his convictions and ability to admit mistakes, as exemplified by his renouncement of the Iraq War and subsequent demand for truth, accountability, and debate. David Graham of The Atlantic memorialized Jones best: “It’s not so much that he belonged to a dying breed; it’s that he was one of a kind” (Graham).

Kriner, Douglas L. After the Rubicon: Congress, Presidents, and the Politics of Waging War. The University of Chicago Press, 2010.

Ross, Kirk, and Felicia Sonmez. “'He Was a Man of Absolute Integrity': Rep. Walter Jones Is Remembered at North Carolina Funeral.” The Washington Post, The Washington Post, 15 Feb. 2019, www.washingtonpost.com/politics/he-was-a-man-of-absolute-integrity-rep-walter-jones-is-remembered-at-north-carolina-funeral/2019/02/14/f694ba68-3086-11e9-86ab-5d02109aeb01_story.html.

Yeoman, Barry. “Walter Jones Jr. Is a Voice of Dissent in the GOP.” The Nation, The Nation Company, 9 Mar. 2018, www.thenation.com/article/walter-jones-jr-is-a-voice-of-dissent-in-the-gop/.

* Note: Taylor Sisk is a journalist who co-authored and assisted Representative Walter Jones with a yet-to-be-published memoir.