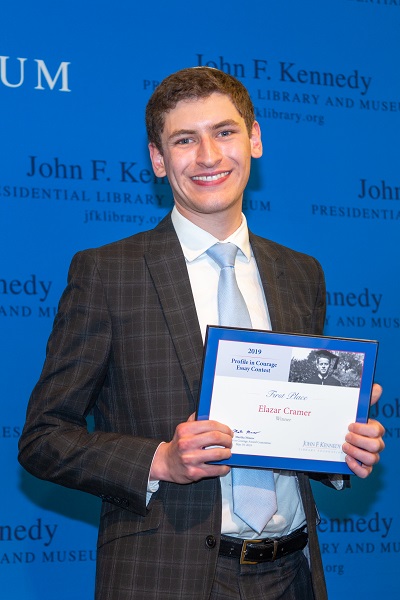 In February of 1939, the prospect of a war in Europe loomed large, and with it, an unprecedented humanitarian crisis. Nazi Germany's increasing persecution of Jews reached new levels with the Kristallnacht pogrom in 1938. Hitler’s policies were clear: European Jews were to become refugees, and ultimately, victims of genocide in lands they had once called home. As the United States watched the pre-war events unfold, it was faced with a dilemma: should America respond to the growing European Jewish refugee crisis, and if so, how? In response to this question, the U.S. took the path of isolationism. The aftermath of World War One shaped America’s conservative immigration laws, which in 1924 severely limited immigration through a quota system (“The Immigration Act of 1924”). As a result, the United States did very little during this time to aid refugees, especially European Jews. This foreign policy, however, was not without opposition: one congresswoman made a stand against the prevailing mentality.

Representative Edith Nourse Rogers, Republican of Massachusetts, experienced World War I firsthand. Rogers inspected field hospitals during the war, volunteering for the Red Cross (“Edith Nourse Rogers”). She cared deeply for those affected by war and recalled of her field hospital experience: “No one could see the wounded and dying as I saw them and not be moved to do all in his or her power to help” (Mangum). After Kristallnacht, she must have felt much the same way about German Jewish refugees, because unlike most American politicians of the time, she acted on her convictions that the United States had a moral obligation to assist them. Rogers was one of the first members of Congress to denounce Nazi policies (“ROGERS, Edith Nourse”); in 1933, the year that the Nazis came to power, she made a speech on the House floor in which she said that “our [American] heritage demands that a protest [against Nazi oppression] be made,” noting that Jews had historically been “driven from land to land” (Rogers). As Nazi aggression steadily increased, the memory of World War I pushed Rogers not toward isolationism, as it did for so many others, but towards humanitarianism. On February 9th, 1939, Congresswoman Rogers and Senator Robert Wagner of New York introduced the Wagner-Rogers bill, which would have increased the immigration quota to allow twenty thousand additional German-Jewish refugee children to enter the country (“Wagner-Rogers Bill,” Holocaust Encyclopedia).

While the Wagner-Rogers Bill garnered much positive publicity and was supported by labor leaders, popular opinion strongly opposed increasing immigration quotas. Powerful nationalist and anti-immigration groups were instrumental in torpedoing the bill on economic and even racial grounds. Senator Robert Reynolds of North Carolina had a key role in killing the proposal, threatening to filibuster the bill (Breitman 73-74) and saying that it was Congress’s duty “to provide aid for the orphans of the United States of America before we attempt to legislate in behalf of the refugee children of the world” (“Congressional Record—Senate”). Laura Delano Houghteling, wife of the U.S. Commissioner of Immigration and cousin of President Franklin Roosevelt, reflected the latent anti-Semitism behind much of the opposition to Wagner-Rogers when she notoriously remarked that “20,000 charming children would all too soon grow up into 20,000 ugly adults” (Breitman 74). Lack of White House support likewise doomed the bill to failure (“Wagner-Rogers Bill,” Encyclopedia of America’s Response to the Holocaust). Although the bill was not completely without support, it received very little among the American public, of whom 72 percent opposed accepting more German-Jewish refugees (Greene and Newport). Only twenty-one senators favored the measure (Breitman 73); ultimately, the Wagner-Rogers Bill never even made it to a floor vote.

John F. Kennedy in Profiles in Courage defines three pressures that discourage elected officials from acts of political courage: the desire to be liked, the desire to be reelected, and pressure from constituents and interest groups (Kennedy 24-30). In her sponsorship of the Wagner-Rogers Bill, Rogers risked her political career by defying all three of these pressures. Rogers’s support of bringing in more immigrants while the American economy was still recovering from the Great Depression could have easily made her unpopular among the American public and even cost her House seat. One voter wrote to the Washington Star: “It is a mistake to say that 20,000 refugee children would not be a burden to the United States, for they would not only be educated at this country’s expense, but they would also, eventually, become approximately 20,000 applicants for American jobs” (“Thinks Refugees Would Be Burden”). Most Americans saw the refugee crisis not in humanitarian terms as Rogers did, but in economic terms. The above letter to the Washington Star reflected a prevailing “America first” mentality among American voters that was stoked by anti-immigration interest groups: in the words of William E. Griffin, secretary of the immigration restriction league of New York who testified at the final hearings for the bill, “there are plenty of undernourished children of our own. . . we should first set our own house in order” (“Refugee Program Is Assailed At Hearing”). By supporting the bill, Rogers, already a minority figure as one of the few women in Congress, put herself in a position where she could easily have been marginalized for supporting what many saw as a non-economically viable and even “un-American” proposal. In the end, she weathered the debate and served over two decades longer in the House, but not without having risked her reputation among voters against the efforts of powerful interest groups—a true act of political courage.

Today, the international political landscape looks frighteningly similar to that of the 1930s. Anti-Semitism is on the rise in both Europe and the United States, and the United States is faced with refugee crises from both the Middle East and Latin America. At a time when so many of the foreign policy challenges we face mirror those of the 1930s, Edith Nourse Rogers is a superb role model. Her legacy ought to be remembered, and it should remind our elected officials that those who are remembered favorably by history are not those who “win” the most, but those who put morality above party politics at the most difficult moments.