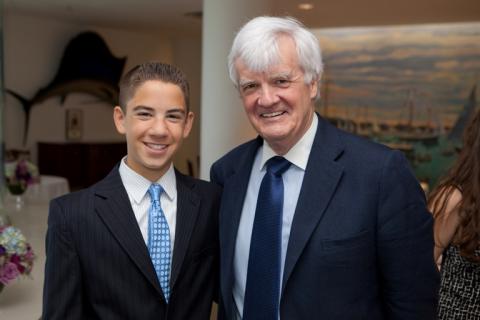 Throughout the Florida Capitol building, there are portraits or memorials commemorating virtually every political dignitary of the state’s past, including a caretaker governor who served merely three days. Nowhere on the premises, however, is there a tribute to the man who committed the most laudable act of political courage in Florida’s history. That man is the late John B. Orr Jr. of Miami (Dyckman).

In response to the Supreme Court’s landmark 1954 Brown v. Board of Education ruling, Florida was one of many Southern states that attempted to forestall racial integration of its public school system. Amidst the 1956 gubernatorial elections, incumbent Florida Governor LeRoy Collins “quietly supported a committee to explore legal measures by which the state could fortify its system of segregated practices” (Winsboro). The committee, chaired by retired Circuit Judge L.L. Fabisinski of Pensacola, recommended “the strengthening of local school boards and the enhancement of the governor’s powers of law enforcement” in order to perpetuate segregation of Florida’s educational institutions (Winsboro). Bearing in mind the Fabisinski Commission’s analysis, Governor Collins drafted a package of bills, including a Pupil Assignment Act and a Private School Corporation Act, to circumvent the Supreme Court’s Brown ruling.

On July 26, 1956, Governor Collins proposed the Fabisinski Commission segregation bills during a special session of the state legislature. When the roll was called on the first of the bills to reach the House floor, eighty-nine legislators, embracing Florida’s discriminatory racial customs, voted ‘Aye.’ Representative John B. Orr Jr. alone voted ‘Nay’ (“Southerner”). On a point of personal privilege, Orr addressed a hushed and tense chamber to justify his dissent (“Dade”). “I believe that segregation is morally wrong,” he professed. “I believe that second- class citizens are repugnant to democratic principles. The fact that the custom is of long standing makes it no less wrong” (“Southerner”). Orr probed the roots of Florida’s racial intolerance, asserting that “the pigmentation of one’s skin is no rational basis for setting him apart,” and, alluding to the original text of the Fifteenth Amendment, “we are backed by our constitution, that we do not discriminate on the basis of race, color, or creed” (“Dade”).

In addition to his ethical grievances, Orr censured his colleagues’ flagrant disrespect for the Supreme Court’s Brown ruling and the broader principles of American law. “To defy the highest court in our land,” Orr introspected, “is unthinkable to me” (“Southerner”). Echoing the Warren Court’s unanimous opinion in Brown, Orr noted that Florida had “not provided equal but separate educational facilities and I don’t believe this is possible. As a consequence of the disparity in educational facilities, we in the South have had over the years a large segment of our population which has been poorly educated” (“Orr’s”). Orr’s subsequent revelation that he was a member of the National Association for the Advancement of Colored People (NAACP) garnered perhaps the bitterest revulsion from his fellow legislators (“NAACP”). The lone dissenter concluded his speech by quoting a prayer recited by the chaplain of the House two days before: “Help us, thus, to see that it is better to fail in a just cause that will ultimately succeed, than to succeed in an unrighteous cause that will ultimately fail” (Taylor). Galvanized by the injustices of Florida’s segregation tradition, Orr boldly advocated for equal academic facilities for an oppressed African-American minority.

Just as John F. Kennedy admired the maverick independence of eight U.S. senators in Profiles in Courage, State Representative Orr epitomized “a politician conscientiously desiring…‘to push [his] skiff from the shore alone’ into a hostile and turbulent sea” (Kennedy 3). After his twenty minute tirade against the Fabisinski bills, Orr “received no applause” when he returned to his House seat (Boyles). Such silence was only a ripple in the torrential political and personal backlash Orr faced in the wake of his lone dissent. The following morning, Orr’s aunt received a phone call threatening death upon Orr and his family (“Orr’s”). A mob of white supremacists bearing torches trespassed onto Orr’s property and burned a cross into his front lawn with gasoline (Duke). In evaluating Orr’s pro-integration stand, Florida newspapers lamented that the young Miamian was “washed up politically” and “alone – without friends – among his fellow legislators” (McDermott, “Stand”). The Miami Herald queried:

Would it not have been better for Orr to have ‘taken a walk’ at the time of the voting in the House of Representatives rather than develop increased animosity of the smaller counties against big Dade? Absenting one’s self from a roll call vote may not be the bravest thing to do, but it is an old maneuver used by politicians who do not wish to be recorded voting on a particular issue. (“Stand”)

Orr could have “taken a walk” during this grueling trial of conscience. But he didn’t.

Miami-Dade voters responded no more favorably to Orr’s audacious dissent. The young legislator was re-elected in 1956 only because the filing deadline had passed (Dyckman). Two years later, “when the opposition had time to gird itself for the battle,” Orr lost to segregationist David Eldridge in the Democratic primary election (Dean). Like outspoken Missouri Senator Thomas Hart Benton, featured in Kennedy’s Profiles in Courage, State Representative Orr was “willing to meet crushing defeat rather than compromise his principles” because “his desire to win or maintain a reputation for integrity and courage was stronger than his desire to maintain his office” (Kennedy 88, 218). Although Orr never achieved any political office higher than Miami-Dade County mayor, a part-time position with little influence, he continued to press for the gradual integration of Florida’s school system (Dyckman, Vecchione).

Orr’s political martyrdom sowed a seed for educational reform in Florida. That seed finally germinated on the morning of September 7, 1959, when “twenty-five African-American students stepped onto the grounds of Orchard Villa Elementary School and Air Base Elementary School,” marking the official end of segregation within the Miami-Dade County Public School system (Winsboro). In essence, Titles IV and VI of the Civil Rights Act of 1964 enabled federal enforcement of desegregation in Florida’s remaining insubordinate school districts (Winsboro). After years of stalwart advocacy in the face of overwhelming opposition, Orr witnessed his just cause of racial integration ultimately succeed.