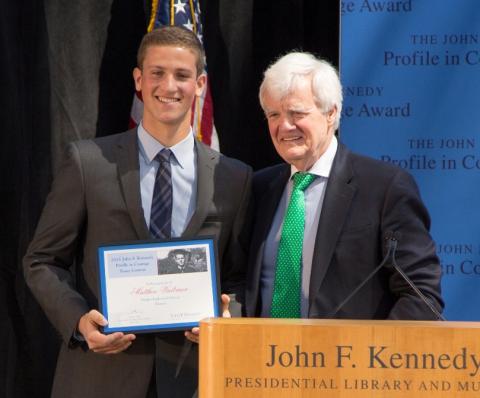 Tom Selders: A Mayor for All the People

Immigration reform is one of the most contentious issues in America today, provoking angry debates in Congress, fueling tension in town hall meetings across the country, and even dividing families. In 2007, as the battle over immigration reform played out in Congress, Tom Selders, the Republican mayor of Greeley, Colorado, put a local face on the issue. Selders spoke out on Capitol Hill about the devastating effect of an immigration raid at a Greeley meatpacking plant and urged Congress to enact comprehensive immigration reform. As a result, he faced a backlash of criticism at home. Selders knew his public stance on immigration was politically risky, particularly since he was seeking reelection in the upcoming mayoral race. Nonetheless, as an elected official, he felt an obligation to advocate for all the people of Greeley, especially those who otherwise would have no voice (Bernuth). Like the courageous senators in Profiles in Courage, Selders was willing to “sacrifice all—including his own career—for” his principles and the greater good (Kennedy 7).

A lifelong Republican from a conservative town, Selders may seem an unlikely advocate for immigration reform. He admits that while growing up on the affluent west side of Greeley, he rarely ventured into the working class Latino neighborhoods on the east side of town. As mayor, however, Selders was determined to meet with community groups from all parts of Greeley to ensure he was representing the interests of all residents, regardless of race, class, or nationality (Riccardi). In December 2006, Selders learned that U.S. Immigration and Customs Enforcement agents had raided the Swift & Company meatpacking plant—Greeley’s largest employer—and arrested 262 undocumented workers as part of a multi-city enforcement action known as “Operation Wagon Train” (Perl 88). Eyewitnesses reported that those detained were “treated like animals” (Cooper). They were handcuffed and shackled, denied access to food, water, and bathrooms, and were not allowed to contact their families (“ICE”).

Shortly after the raid, many of those arrested were deported. Others remained in legal limbo for more than a year awaiting a hearing (Warner). On the day of the raid, more than 200 Greeley children returned home to find one or both parents gone (Lofholm). Selders sympathized with the children—many of whom were U.S. citizens—who were “devastated by their parents being arrested and detained,” but he initially did not speak out (Riccardi). When John F. Kennedy first entered Congress, he was told that “the way to get along is to go along” (Kennedy 4). These words were equally applicable to the situation in Greeley, where local leaders faced pressure to not “rock the boat” by taking positions contrary to the prevailing political sentiment (Thompson). However, as more details emerged about the raid and as community relations degenerated over the immigration issue, Selders knew he could not remain silent. He denounced the inhumane treatment of those arrested. “People with leg irons and handcuffs—was that really necessary?” he asked. “Is this what our country is about?” (qtd. in Olinger).

In May 2007, Selders traveled to Washington, D.C. to speak to Congressional lobbyists about the impact of the raid on immigrant families and the community (Delgado). He recognized his actions would likely be unpopular with those who had helped Greeley earn its reputation as “a GOP stronghold” (Cooper). Yet, he also knew that promoting the dignity and respect of all residents, especially those he “felt had not been well represented,” was the “right thing to do” (qtd. in Bernuth). Selders also hoped to prompt meaningful debate about immigration reform and move the discussion past divisive, partisan bickering and toward constructive solutions (Selders). In Profiles in Courage, Kennedy commended elected officials who had the political courage to break with their parties and place “their convictions ahead of their careers” (206). By taking a stand in favor of a more humane immigration policy, Selders did just that.

In the wake of his trip, Selders faced tremendous political repercussions. He was vilified on local talk radio (Riccardi), and received angry emails and “more hate calls than I care to mention” (qtd. in Quintero). Some accused him of wanting to turn Greeley into a sanctuary for illegal immigrants. Others called him “traitor scum” and derisively asked, “Have you thought about running for mayor of your favorite country, Mexico?” (“Swift Justice”). There were threats of a recall petition and demands that Selders withdraw his reelection bid (“Residents”). But Selders refused to be intimidated. “When you get elected to a job like mayor,” he said, “you deal with controversy” (qtd. in Villegas).

During Selders’ reelection campaign, his challenger blasted his stance on immigration and members of his own party actively campaigned against him (Boyle). Selders was also the target of hateful campaign mailings by anonymous groups. One accused him of advocating “instant U.S. citizenship” for undocumented workers (“Greeley”). Another claimed Selders was soft on “gangs, crimes and illegals” (Louis-Sanchez).

In the end, Selders’ refusal to “compromise away his principles” (Kennedy 11) on immigration cost him the election (“Greeley”). The Los Angeles Times called Selders’ defeat “a cautionary tale of the politics of illegal immigration,” which, to some, showed “how a good man trying to do the right thing was taken down by the forces of intolerance” (Riccardi). Following his defeat, Selders was asked if he would speak out again, knowing the political consequences. “I’d do it again in a heartbeat because it was the right thing to do and it needed to be done,” he replied. “[I]llegal people who are here are still human beings. They deserve at least the dignity of being treated with respect” (qtd. in Bernuth).

Today, America finds itself at a crossroads as it grapples with the question of what type of nation it aspires to be. Does it want to be a country that deprives individuals of their basic human rights simply because of their immigrant status? Tom Selders courageously said no. By taking a stand in favor of immigration reform and the basic dignity and humanity of all people, Selders did more than exemplify political courage: he showed what it means to be an American and uphold the values that we, as a nation of immigrants, should hold dear.