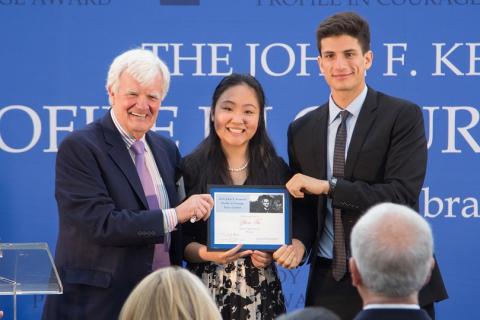 Howard Baker: The Great Compromiser of the 1970s

On September 7, 1977, President Jimmy Carter and Panamanian General Omar Torrijos signed two Panama Canal treaties, one of which eventually led America to relinquish control of the Panama Canal. After exhausting debates, the Senate ratified the treaties the following year. During the months of debate in the Senate, many senators and American citizens alike were strongly against ratifying the treaty. Republican Senator Strom Thurmond echoed Theodore Roosevelt’s sentiment: “The canal is ours, we … paid for it and we should keep it” (qtd. in “Moments in”). Given the staunch resistance from the majority of Republicans, it is difficult to imagine that Republican Senate Minority Leader, Howard Baker, tirelessly led the ratification process because he believed in bipartisanship to advance the best interest of Panama and the United States. His actions were seen as politically suicidal, especially since he harbored hopes to clinch the Republican nomination for President in 1980 (“Moments in”). Yet, similar to the senators in Profiles in Courage, Baker’s action of political courage kept “alive the spirit of individualism and dissent which gave birth to this nation” (Kennedy 17).

One may wonder what caused a Republican Senator from Tennessee to jeopardize his political career by espousing the ratification of the Panama treaties. Baker, a moderate conservative known for his willingness to make compromises, acquired the powerful art of compromise from his father-in-law, Senator Everett M. Dirksen, who gave Democratic Presidents Kennedy and Johnson invaluable support and advice during the years he was in office (Kenworthy). One of Baker’s family members likened him someone who was comfortable while floating down the middle of the Tennessee River (Hunt). Indeed, it took some time for Baker to determine his firm position amid the bitterly divided political scene regarding the Panama Canal. Although he had agreed to consider President Carter’s plans in 1977, Baker knew that his decision might hinder his reelection prospects (Annis 123). Consequently, he told Carter that he needed to inform Americans of the political situation concerning the canal before the Senate hastened to make a decision. An August poll in 1977 indicated that seventy-eight percent of the American population objected to giving up the canal, while merely eight percent supported the idea (Annis 123). In Baker’s home state Tennessee, a majority of citizens were also strongly against the treaties (Culvahouse).

Being the moderate Republican that he was, Baker devoted his time to investigating both sides of the dispute before making his decision. The true turning point came when Baker traveled to Panama with colleagues. While meeting with “Panamanians from all walks of life,” Baker saw the chaos that could erupt in Panama if the treaties were rejected. Furthermore, American commanders warned that rejection might very well lead to “further [anti-American] sentiment and propel sabotage against the canal” (Annis 130). After returning to the White House on January 16, 1978, Baker notified Carter that he would support the treaties if some amendments were made. Before making his final decision, Baker conversed with his staff, seeking to predict the implications his stance would have on his presidential hopes for 1980. He was informed that the Republicans would never nominate him. Baker replied, “So be it” (qtd. in Gerstenzang).

Unsurprisingly, Baker’s decision was met with a torrent of criticism across the country. He received 64,000 letters in two months, ninety-eight percent of which contained messages from those opposing the treaties. Twelve House Republicans requested that Baker abdicate his leadership, writing, “You have no right, to use that office as a means of advancing the treaties against the wishes of our party and the American people” (qtd. in Annis 131). The backlash Baker received reflects Kennedy’s statement that “the courage required of the Senator [to defy] the angry power of the very constituents who control his future” is perhaps the greatest political test of all (Kennedy 222).

In February of 1978, vociferous debate over the ratification of the Panama treaties finally began on the Senate floor (Annis 131). Baker worked closely with Democratic Senator Robert Byrd from West Virginia to produce the Byrd-Baker leadership amendment. In March and April of 1978, the Panama Canal treaties with the amendments were passed in the Senate “with one vote more than needed to enter the two-thirds threshold” (Ornstein). President Carter lauded Baker for “being so courageous in a time when it was not easy” (qtd. in Beasley). Of the twenty senators who voted for the Panama Canal treaties and were up for reelection in 1978, only seven returned to the Senate the following year. Needless to say, Baker’s support for the treaties cost him the opportunity to obtain his party’s nomination for President in 1980 (Hunt).

In the years after the U.S. gave control of the canal back to Panama, Baker believed that the “canal is doing well, doing better than it ever did when we had it” (qtd. in Beasley). In an interview at the University of Tennessee in 2005, Baker reflected upon his actions in the 1970s, saying that “the United States would be better off ratifying the treaty in the hope that the

Panamanian government could be our friend and ally” (University of Tennessee). He further added, “The country is [now] genuinely our friend… so I think it was the right decision.” While Baker essentially sacrificed his political career, he made the right decision and achieved an important moral victory.

Howard Baker embodied the true soul of a courageous man, from supporting the Voting Rights Act of 1965 to alienating his fellow conservatives by advocating for the Panama Canal

treaties (Rudin). Columnist Albert Hunt said it best: “Perhaps no politician in modern times has been as qualified to be president but never made it than Howard Henry Baker” (Hunt). Howard Baker’s act of political courage is still recognized and honored today, serving as testament to his legacy that will unequivocally influence and motivate many people for generations to come.