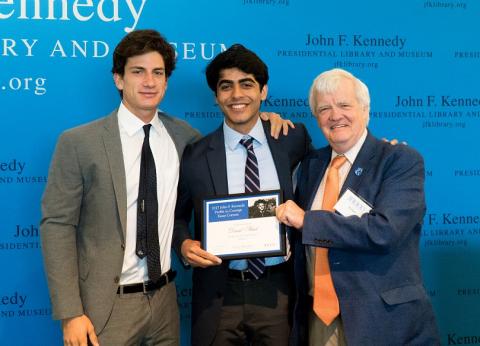 Piqua, a small farming town in Ohio, would be a surprising site for one of the most consequential political meetings in American history. But on July 2, 1963 -- seven weeks before the March on Washington -- Assistant Attorney General Burke Marshall flew there, on behalf of Robert Kennedy, to meet with local politician William Moore McCulloch (“Delivering”). McCulloch, the Republican representative of Ohio’s rural and conservative 4th congressional district, was a modest man who always carried “plain yellow pencils in his shirt pocket,” but he had the tenacity to move Congress over civil rights (Baughman; Whalen 12). An agreement he reached with Marshall that day in 1963 was considered political suicide for McCulloch, but it would forever change the nation.

Politically courageous officials are defined in John F. Kennedy’s Profiles in Courage as those who put “their convictions ahead of their careers” (206). Like one of the book’s profiled senators, George W. Norris, William McCulloch followed his heart, not political party and expedience, in supporting legislation. McCulloch had a constituency that was over 97 percent white, in which racial discrimination “was a fact of life” (Pach; “Civil”). Though “he had no political incentive to stick his neck out on something as contentious as civil rights," McCulloch worked tirelessly on the crucial issue (Keller). For McCulloch, a representative was elected to serve as a trustee and act in accordance with principles, not act for parochial popularity. When Marshall asked the respected Republican, a descendant of abolitionists, for help in passing the Civil Rights Act, he accepted. He knew that working so closely with the Democrats and Kennedy administration would be politically imprudent, but his “unwavering passion for equality and justice” compelled him (Weinstein).

Previous twentieth century civil rights bills had been severely weakened in Congress. This was due to amendments added by segregationist Southern Democrats that other Democrats acquiesced to in the name of party unity, frustrating Republicans like McCulloch (Thomas). This time, McCulloch would not tolerate anything less than a comprehensive bill. In exchange for supporting the administration and advocating the bill, he was promised three things: the House bill would not be “watered down and sacrificed in the Senate just to secure passage,” any amendments to the bill would be approved by him, and his fellow Republicans would be “credited for their essential role” (“Delivering”). At the time, in late 1963, McCulloch was “conducting a lone crusade” for bipartisan support by building coalitions and assuring advocates on both sides of the aisle of the bill’s security (Whalen 55).

To succeed, McCulloch would first need to revise the eventual Civil Rights Act as the senior Republican on the House Judiciary Committee. He worked with the Committee’s head, the Democrat Emanuel Celler, to write compromising legislation that would be as balanced as possible without losing its integrity. McCulloch wanted to make sure that it met all the goals of bringing justice and equality to long neglected Americans, and that it would pass smoothly. For his negotiations across the board, McCulloch was met with disapproval across Congress; McCulloch’s alliance with the Kennedys was unorthodox and viewed by some Republicans as “bordering on treason” (Keller). Despite these attacks, McCulloch risked his political career on the bill, believing that “only in compromise, moderation and understanding are we able to fashion our society into a cohesive and durable structure” (qtd in Keller). Some accused him of supporting the legislation out of intimidation and fear, but it was his “belief in the inherent equality of all men” that led him to act (qtd in Whalen 105). He felt the bitter criticism, but it was his courage in the face of disapproval that was essential to the bill’s success.

H.R. 7152, the civil rights bill, was passed after strenuous work on February 10, 1964, because McCulloch convinced 60 critical Republicans to vote “aye” (Purdum 112). It received 138 Republican votes (80 percent of House Republicans) and 152 Democratic votes (61 percent of House Democrats) (“H.R. 7152”). Most of the Republicans who voted “nay” were in favor of keeping civil rights as a state issue, and most of the Democrats who opposed it chose supporting segregation over maintaining party unity. The bill also passed in the Senate, but with minor amendments that McCulloch approved. In fact, McCulloch’s overarching influence over the bill earned him the nickname  “Czar of the Senate” (Thomas). The act was signed into law by President Johnson on July 2, 1964… exactly one year after Burke met with McCulloch in Piqua.

Herculean in his moral convictions, McCulloch knew doing the right thing was infinitely better than losing an election or popularity. His house was picketed, he was called “uncomplimentary epithets,” and abuse came to him from Piqua and abroad- he did not like to discuss it (Whalen 228). Reminded of her husband’s book, Jacqueline Kennedy wrote to McCulloch declaring that his battle for civil rights "against all the interests of [his] district" and “integrity under such pressure is what makes our political system worth fighting for and dying for” (1-3). Though he never lost his office, McCulloch was “often opposed by district candidates who used strong union contributions to run against him” and challenged his loyalties (Oda). Partisan pressure did not intimidate McCulloch, as he would rather bring about what he perceived as positive change than play politics.

According to Attorney General Robert Kennedy, McCulloch’s “vital assistance and leadership was of singular importance in securing passage of [the historic Civil Rights Act]” (1). William Moore McCulloch personified political courage when he prudently looked beyond partisanship, approval, and political advantage to advocate for something that he staunchly believed in. Before McCulloch returned to Piqua after an arduous victory, the House venerated the humble champion of civil rights with a rare display -- a standing ovation (Purdum 319).

Note: Sources from the William McCulloch website, www.williammcculloch.org, were accessed through the internet archive Wayback Machine.