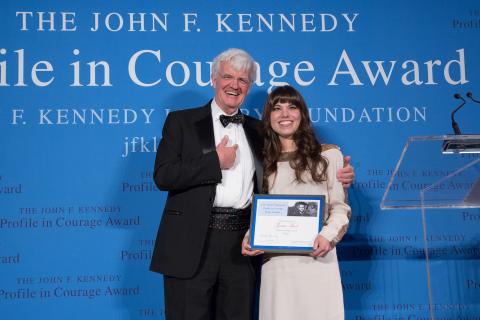 Roy McDonald: Protector of the Party of Lincoln

Under the bright lights of Russell Sage College in Troy, New York, only a few days before the September 2012 Republican primary, State Senator Roy McDonald was clearly exasperated. Despite his attempts to focus the debate on chronic unemployment, his opponent Kathleen A. Marchione had another agenda. Over the roar of the restless crowd, Marchione persistently questioned McDonald about his controversial vote in favor of the Marriage Equality Act in June 2011. In rebuttal to Marchione’s accusations that his vote to legalize same-sex marriage was motivated by the promise of campaign donations, McDonald explained that he broke from traditional Republican values because he was a “human being that care[d]” and “could have found an easier way to get re-elected” (Kaplan, “Gay Marriage Vote”). In what New York Governor Andrew M. Cuomo described as “an act of political courage,” McDonald crossed party lines in June 2011 to set the precedent of marriage equality in New York State (Kaplan and Grynbaum).

McDonald’s vote in favor of same-sex marriage shocked his constituents. Known for his conservative values, McDonald was a well-respected Republican from Saratoga County. During his 23-year run as the Town and County Supervisor and the chairman of the Saratoga County Board of Supervisors, McDonald’s proudest achievement was eliminating local property taxes for 20 consecutive years. In fact, the county budget he proposed made Saratoga the lowest taxed county in New York State. After building a reputation of reliability and traditionalism in Saratoga, McDonald moved on to state politics with his election to the state senate in 2008 (“Roy”). As John F. Kennedy asserts in Profiles in Courage, one’s courageous potential is “an opportunity that sooner or later is presented to us all” (Kennedy 225). The Marriage Equality Act presented McDonald the opportunity to elevate himself from a forgettable official to a bold nonconformist.

McDonald’s role in the passage of the Marriage Equality Act was groundbreaking. The New York State legislature was the first chamber with a Republican majority to approve same-sex marriage (Kaplan, “Results for G.O.P.”). McDonald was one of only four Republican senators who voted for the Marriage Equality Act, making New York the sixth state to allow same-sex marriage. Affecting more than 42,000 same-sex couples raising 14,000 children, the law provided that same-sex couples could obtain marriage licenses and acquire the rights, benefits, and protections of married couples (“Know”). Gay-rights advocates rejoiced the passage of the act, including Governor Cuomo who applauded McDonald for standing up “for equality, and for a population long victimized” (Kaplan, “Cuomo Backs Republican”). Although the 777,000 same-sex couples living in the United States and other gay-rights supporters celebrated the first Republican-leaning state to sanction same-sex marriage, the opponents of the act were outraged (Nagle 5).

The backlash against McDonald and other supporters of the Marriage Equality Act began on July 25, 2011, with the first legal challenge to the new law. Leaders of New Yorkers for Constitutional Freedoms, an evangelical church group, asked the courts to halt same-sex marriage ceremonies and declare the hundreds of same-sex marriages performed since the law took effect to be void. The conservative group claimed that the Senate Republicans, including McDonald, engaged in illegal meetings with New York Mayor Michael Bloomberg and Governor Cuomo in which the Senators received donations for switching to support the law (Precious). Despite the rising pressure from conservative groups, McDonald said that he would not regret his vote even if it ended his political career (Kaplan, “Gay Marriage Vote”). He maintained the “faith that his course was the best one” and thus defended his political courage (Kennedy 219).

In addition to specific conservative groups like the New Yorkers for Constitutional Freedoms, the majority of the American public is opposed to same-sex marriage. According to a survey conducted in 2003 by the Pew Research Center for the People of the Press, 59 percent of Americans oppose allowing gays and lesbians to marry legally (“Public”). In a 2004 National Election Studies survey, 75 percent of respondents agreed that there should be more emphasis on traditional family ties and religious values (Rimmerman and Wilcox 221). Overall, Republicans identify with the traditional and biblical definition of marriage more than Democrats. In fact, only 23 percent of Republicans supported legalizing gay marriage in a 2012 CNN/ORC International poll (Reinhard). Therefore, the condemnation of McDonald’s vote on the Marriage Equality Act among his Republican constituents could have been expected; McDonald cast his vote knowing the threat it posed to his political career.

McDonald learned the true consequence of his vote on September 13, 2012, when his opponent Marchione defeated him in the Republican primary by approximately 122 votes (Kaplan, “Votes Aren’t All Tallied”). Marchione credited her victory to the fact that “people fe[lt] betrayed” by McDonald’s endorsement of the Marriage Equality Act. She and her supporters accused McDonald of deceiving his constituents by changing his position on same-sex marriage, which he had opposed in the past. However, McDonald explained that he too believes in traditional marriage and was not looking for his “15 minutes of fame” by casting the controversial vote. Rather, he was protecting his “party of Abraham Lincoln,” in which “everybody’s included” (Kaplan, “Gay Marriage Vote”). In the words of Kennedy, McDonald was more than a “robot dutifully recording the views of constituents” or a “time- server skilled only in predicting and following the tides of public sentiment” (Kennedy 18). He switched his position on same-sex marriage to protect the equality and dignity of the greater public; for this act, his reputation among his conservative constituents was irreversibly damaged.

McDonald’s leap of faith in June 2011 came at a steep price. Although his vote in favor of same-sex marriage cost him his reelection to the state senate, it was a worthy sacrifice. In the words of Mayor Bloomberg, McDonald walked away from the state senate with the “satisfaction of knowing for the rest of [his] life [he] stood up and voted [his] conscience” (Kaplan and Grynbaum). McDonald reaffirmed America’s “faith that the people will not simply elect men who will represent their views ably and faithfully, but also elect men who will exercise their conscientious judgment” (Kennedy 223). During his first and last term in the state senate, McDonald achieved a feat most politicians do not accomplish in a lifetime—he embodied true democracy.

Rimmerman, Craig A. and Clyde Wilcox. The Politics of Same-Sex Marriage. Chicago: The University of Chicago Press, 2007. Print.